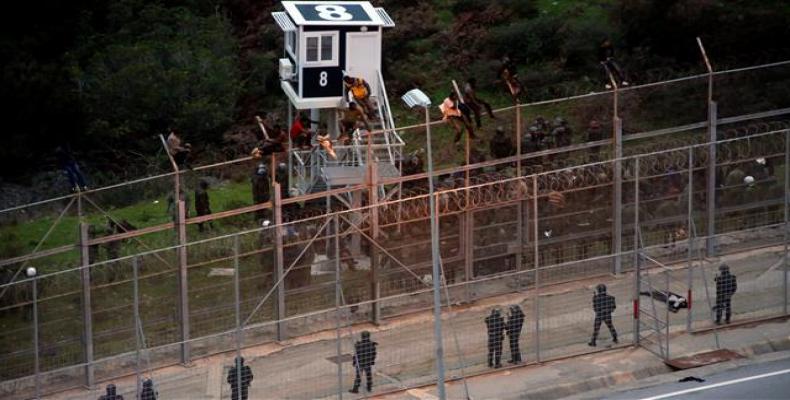 Madrid, January 4 (RHC)-- A series of violent clashes has erupted after over 1,000 refugees attempting to reach Europe stormed a border fence between Morocco and Spain's overseas territory of Ceuta.

The clashes broke out after a group of 1,100 people from Sub-Saharan Africa tried to jump a high double fence between Morocco and the Spanish enclave of Ceuta.  The central government's representative office in Ceuta in a statement confirmed that the refugees assaulted in an "extremely violent and organized" way.

The statement added that at least five Spanish policemen and 50 members of the Moroccan forces were injured.  The assault also saw one officer lose an eye.

At least two refugees were also badly injured and taken to hospital in Ceuta.  According to the statement, the refugees used wire iron bars and stones to cut through the fence.  They tried "to force open some of the doors in the external fence, using iron bars, wire cutters and large stones with which they assaulted Moroccan forces and (Spanish) Guardia Civil (police) agents."

According to local authorities, just over 100 people managed to climb up the external fence and stayed on top for hours.  Footage shot by local Faro TV showed that at least one man perched at the top of the six-meter high fence.  Ceuta along with Melilla has the European Union's only land borders with Africa.  The refugees in the past got there by either climbing over the border fence or by swimming along the coast.

Amnesty International and other rights groups have repeatedly criticized the Spanish government for the treatment of refugees in two of Spain's overseas territories.

Europe faces a major influx of refugees, most of whom are fleeing conflict-ridden zones in Africa and the Middle East, particularly Syria.  Many blame support by some Western countries for militants operating in the Middle East as the main reason behind the departure of refugees from their home countries.