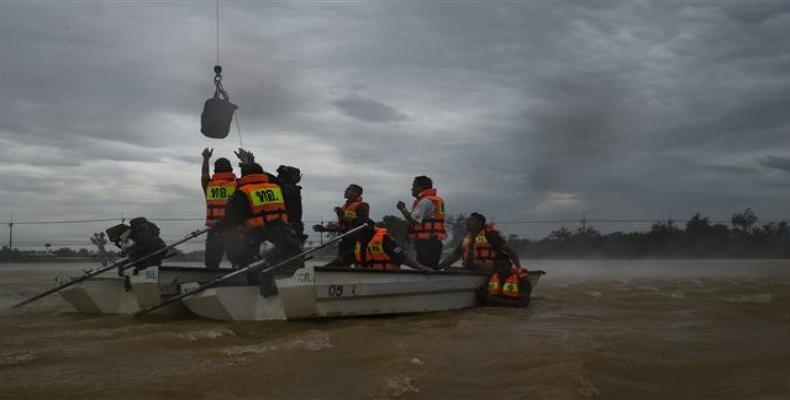 Bangkok, January 10 (RHC)-- Flooding has killed at least 25 people in Thailand’s south since the start of the year, affecting more than a million people.  The Interior Ministry said on Tuesday that the floods have hit 12 provinces since January 1st, cutting off the south from the rest of the country after the main highway connecting the region with other areas swamped.

A highway department spokesman said vehicles were stopped from passing the highway after two bridges collapsed.  The rising floodwaters have also suspended train services in the southern part of the country.

Thailand's wet season usually ends in late November and heavy downpours are rare in January. Widespread floods killed over 900 people in the Southeast Asian state in 2011.  The region has been hit by what Thai Prime Minister Prayuth Chan-o-cha described as the heaviest January rainfall in 30 years.

The downpours in southern Thailand have left schools closed.  One of the major airports in the region has been sealed since last Friday and will be closed at least until tomorrow, Wednesday.

The flooding has submerged vast tracts of the south, which is an agricultural hub for rubber, palm oil and fruit plantations.  Soldiers have been deployed to take part in the relief and rescue operations in the worst-affected areas.

The rain is predicted to slacken over the next 24 hours in the region, which is known as a major tourist destination.