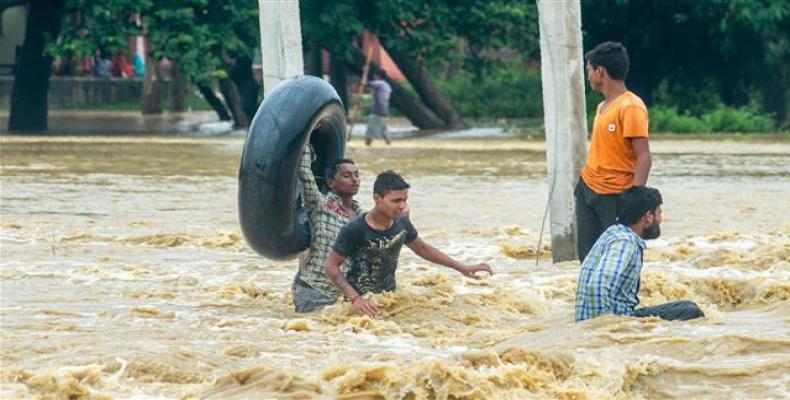 Guwahati, August 15 (RHC)-- At least 175 people have died and thousands fled their homes as monsoon floods sweep across Nepal, India and Bangladesh, officials say, warning the toll could rise as the extent of the damage becomes clear.

Three days of relentless downpours sparked flash floods and landslides that have killed at least 80 people in Nepal, 73 across northern and eastern India and 22 in Bangladesh.

Around 200,000 people are living in emergency camps in Assam in northeast India, which suffers frequent flooding during the annual monsoon rains.  Another 15,000 have had to leave their homes in the eastern state of Bihar, which borders Nepal and where one official said seven rivers were at danger levels.

Large parts of the state were submerged in 2008 when a river burst its banks across the border in Nepal, with the two countries trading blame for the disaster.  All trains to the northeast have been suspended until Wednesday, with sections of the track completely submerged in water, Indian railway spokesman Anil Saxena told AFP.

Police said over 48,000 homes have been totally submerged by the floods across Nepal's southern plains.  As emergency workers struggled to reach far-flung areas, the country's home ministry said another 36 people were missing, presumed dead, revising down an earlier count after more bodies were found.

"Several villages and settlements are unreachable. Telecommunications, mobile phones are still not working so it is difficult to give a full assessment."  A local volunteer in Saptari district -- one of the worst affected areas -- said the water level was receding but many people were still stranded on higher ground.  "Water level has decreased a little bit but families still cannot return home. They are taking shelter in sheds. What people need now is clean drinking water and food," Dipak Kumar Yadav told AFP.

On the outskirts of Janakpur, in southeastern Nepal, local residents were sheltering in a local temple after the flood waters had totally destroyed their basic mud homes, though the water had mostly receded.

In India, emergency workers were scouring the area hit by a massive landslide that swept two passenger buses into a deep gorge on Sunday, killing at least 46 people in the mountainous northern state of Himachal Pradesh.

Local government administrator Kazi Hasan Ahmed told AFP up to 700,000 people had been marooned by flood waters after rivers burst their banks following days of heavy rain.  "We've not seen such severe floods in Dinajpur since 1988," he said, referring to the worst-hit district.  "The town protection embankment was washed away by flood water, submerging most of the main town."

The government's Flood Forecasting and Warning Centre warned that water levels in some major rivers would continue to rise over the next 72 hours, raising fears the flooding could spread.

In Nepal, the worst of the flooding was in the southern lowlands known as the Terai, the country's most fertile region and home to much of its agriculture.

"We are getting reports that about 70 percent of agriculture area in the Tarai is inundated," said Shankar Sapkota, senior agricultural economist with the government.  "Paddy fields, vegetable plantation and fish farms have been affected but right now we cannot confirm the extent of damage."  Nearly 150 people have been killed in Nepal since the beginning of the rainy season in late June.

The rains are now expected to shift westwards and authorities in Nepal have begun evacuating 74,000 people from a vulnerable western district.

Hundreds have died in torrential rain, floods and landslides in neighboring India during the monsoon, which hits the country's southern tip in early June and sweeps across the nation, lasting into September.