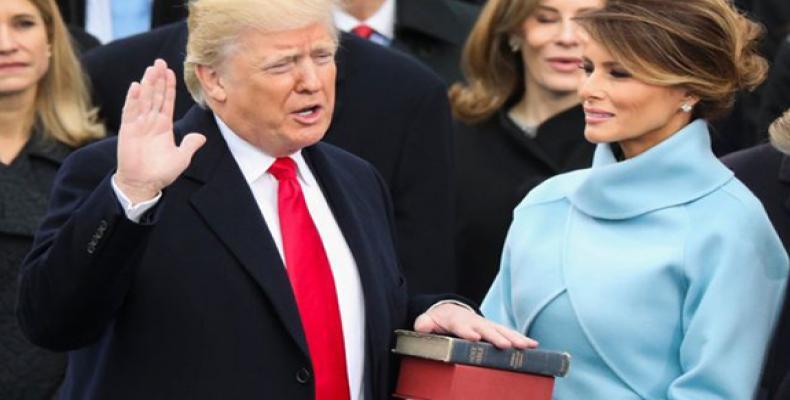 Havana, January 20 (RHC)-- Donald J. Trump was sworn in today as the 45th president of the United States, after which he delivered a populist speech listing scores of hard to achieve political promises.

The United States won’t impose its lifestyle on anyone but “we will shine for everyone to follow,” said Trump in his inaugural speech.  We are transferring power from Washington, D.C. and giving it back to you, the American people, said the billionaire turned president.

Donald Trump charged that the establishment had protected itself, but not the citizens.  Politicians prospered, but jobs left, and factories closed, he said, stating that “all that changes, starting right here, and right now, because this moment is your moment: it belongs to you.”

The crime, and the gangs and the drugs... this American carnage stops right here and stops right now, he said.  And Trump said also that “radical Islamic terrorism” was going to be “eradicated completely from the face of the Earth.”

In Washington, DC, protests reportedly broke out about an hour before Donald Trump was inaugurated when protesters began breaking shop windows, extensive to a Bank of America branch whose windows were shattered and a Starbucks left with a gaping hole in its front door.

Police in riot-gear and helmets moved in quickly, using pepper spray to break up groups of protesters, who spread out and kept breaking windows.  Most of protesters appeared to be young men.

About 28,000 security personnel, miles of fencing, roadblocks, street barricades and dump trucks laden with sand are part of the security cordon around three square miles of central Washington.

Those attending the inauguration ceremony and parade faced six security checkpoints, with more than 40 items banned -- including backpacks and selfie-sticks.