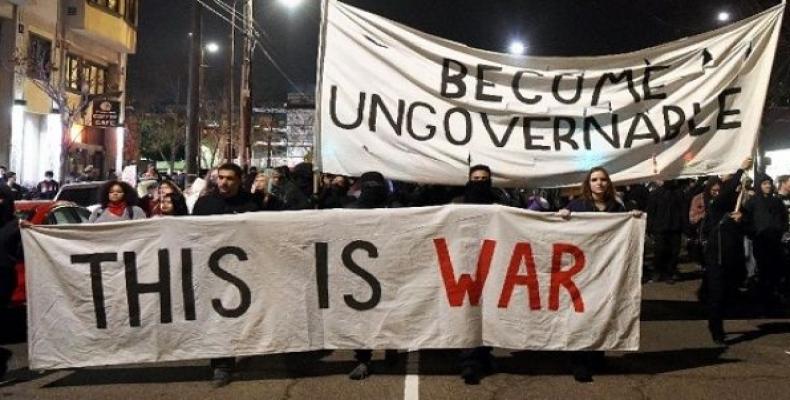 San Francisco, February 3 (RHC)-- Controversial far-right figure and Breitbart editor Milo Yiannopoulos was run off of the University of California at Berkeley Wednesday by protesters, leading to campus police placing the university on lockdown.  In response, U.S. President Donald Trump threatened to cut off federal funding for the institution.

Trump tweeted early Thursday morning: "If U.C. Berkeley does not allow free speech and practices violence on innocent people with a different point of view — NO FEDERAL FUNDS?"

Thousands had gathered the night before to protest the speech by the self-described "occasional fellow traveler with the alt-right" at the Martin Luther King Jr. student union.  The Associated Press describes the "alt-right" as “a white nationalist movement.”  After several hours, some of the activists reportedly began launching fireworks at the building, while others used police barricades to smash windows, according to the Guardian.

Soon afterward the police announced, to the cheers of many of the protesters, that Yiannopoulos' event had been canceled.  "We won’t put up with the violent rhetoric of Milo, Trump or the fascistic alt-right," a Berkeley student who declined to give a name, told The Guardian.  The activist, carrying a "Queers Bash Back" banner, defended the aggressive tactics that many associate with the anti-fascist, or antifa, movement.

“The moral imperative is to win,” said another activist Lana Wachowski in explaining the importance of denying white nationalists like Yannopolous a platform.  “There’s something to be said for fighting according to a code, but if you lose, people are going to die.  People are going to get deported.”

After police announced the event was canceled the protest turned into something of a celebration, with the Guardian reporting that demonstrators used a sound system to play "Fuck Donald Trump" by the YG's.

Yiannopoulos, who writes for the self-described "alt-right platform" Breitbart News, was banned from Twitter last year for racist and sexist abuse.  Only two weeks ago another protest forced the cancellation of a Yiannopolous event at University of California at Davis.

After Yiannopoulos’s speech at Berkeley was announced several weeks ago, students and faculty sent hundreds of letters to university administration demanding the cancellation of his appearance, calling his speech “harassment, slander, defamation, and hate speech,” the Los Angeles Times reported.

In response, University Chancellor Nicholas Dirks defended Yiannopoulos’ right to speak, despite calling him "a troll and provocateur who uses odious behavior in parts to 'entertain', but also to deflect any serious engagement with ideas (which are) at odds with the values of this campus."