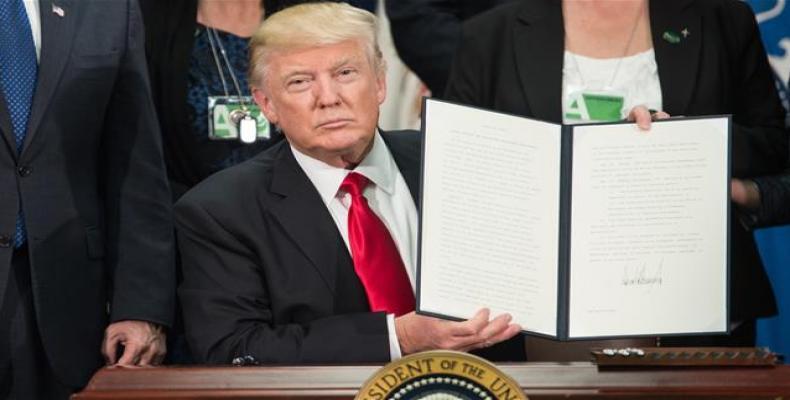 Washington, March 18 (RHC-Xinhua) -- The U.S. Justice Department filed a brief notice saying it would appeal a Maryland federal judge's ruling that halted a key portion of President Donald Trump's revised immigration order, which was set to take effect one day before.

The Justice Department has not yet filed its formal appeal in the Fourth Circuit Court of Appeals, located in Richmond, Virginia, where the case will eventually be heard, said local media reports.

The ruling in Maryland and another in Hawaii earlier this week claimed Trump's temporary barring U.S. entry to global refugees and immigration from six predominantly Muslim countries violates the First Amendment of the U.S. Constitution, citing statements by Trump and his advisers that suggest the real purpose of the disputed immigration order was to discriminate against Muslims.

The Trump administration denied it is a Muslim ban, arguing the order aims to prevent terrorism by suspending visitors from terror-prone countries where visa vetting is allegedly not effective.

Hours after the Hawaii federal judge's ruling on Wednesday, Trump slammed it as "an unprecedented judicial overreach", pledging to take dispute  to the Supreme Court.

Under President Trump's order, a 90-day ban on travel to the U.S. will be imposed on citizens of Iran, Libya, Syria, Somalia, Sudan and Yemen, while freezing refugee resettlement for four months.