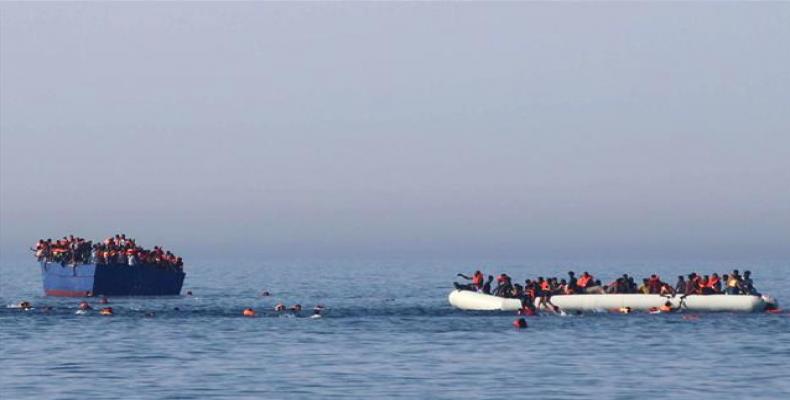 Tripoli, April 19 (RHC)-- More than two dozen dead asylum seekers have been found by fishermen on a boat off the coast of Libya.  Ahmaida Khalifa Amsalam, the Interior Ministry's security unit commander, told reporters that it seemed the victims died of thirst and hunger after their boat broke down off the coast of Sabratha city.

Twenty-eight asylum seekers, including four women, were found after sunset by the fishermen who towed the vessel to shore.  He said that their boat stopped in the middle of the water "because the engine was broken."  The official did not reveal the nationalities of the victims.

So far this year, at least 900 asylum seekers have died or have gone missing while attempting to cross the Mediterranean Sea according to the International Organization for Migration.

Almost 90 percent of the 900 deaths in the Mediterranean have been recorded on the Libya-to-Italy route.  In one incident on April 13, 23 people were rescued and 97 are estimated to have gone missing, 77 men, 15 women, and five children from Africa, off the coast of Gargaresh, near the Libyan capital, Tripoli.  In another incident off the coast of Libya's Qarabulli on the night of April 14, 101 refugees were rescued, and five others died.

Human traffickers use flimsy inflatable rubber dinghies and unseaworthy wooden boats to transfer hapless refugees across the Mediterranean Sea to Europe in hope of escaping war and conflict and finding better lives.

Many asylum seekers perish in boat en route, while some are saved by rescue ships and other vessels, and some are intercepted and turned back to shore by the coast guard.  As weather conditions get better the number of asylum seekers increases.

Between April 14 to April 16, a total of 8,360 asylum seekers were rescued in the Mediterranean by the Italian Coast Guard, many Non-governmental Organizations (NGOs) rescue ships, Frontex, EunavforMEd and commercial ships.