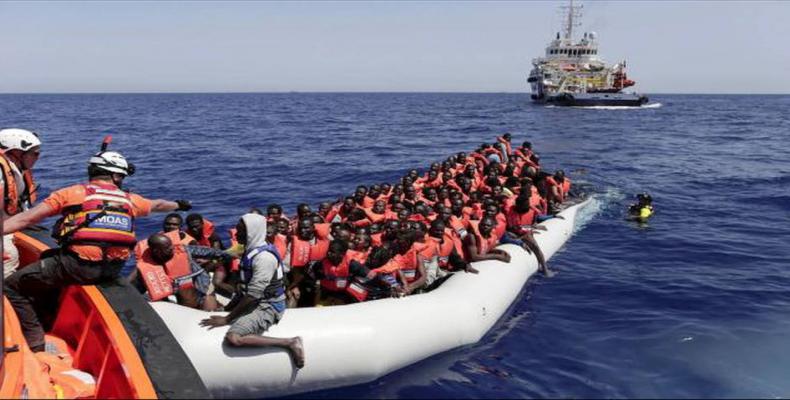 Geneva, November 9 (RHC)-- The UN's migration agency says at least 240 refugees have lost their lives after two more boats sank off the Libyan coast in the Mediterranean Sea.  One group of refugees, including about 20 women and six children, set off in a rubber dinghy from Libya, but their boat sank after a few hours, said Flavio di Giacomo, a spokesman for the International Organization for Migration (IOM).

Reports said most of the refugees had drowned by the time rescue workers arrived.  Twelve bodies were recovered, including those of three babies.  About 27 people survived the tragic incident.

Another two women reported surviving a separate disaster that happened at about the same time.  Their boat was carrying about 130 people.

With the latest deaths, some 4,220 lives have been lost in the Mediterranean so far this year, showing an increase compared with 3,777 in 2015, the IOM stated.  October saw a surge in refugees landing in Italy, with 27,388 arrivals, more than the two previous Octobers combined, and bringing this year's total arrivals to over 158,000, di Giacomo said.

The IOM official further said the surge in boat tragedies comes as human traffickers, who arrange the perilous journeys across the Mediterranean, have been informing asylum seekers that Europeans are training Libyan coastguards to stop the flow of refugees.

Last week, EU-NATO forces launched Operation Sophia and Operation Sea Guardian in the Mediterranean to curb the flow of asylum seekers headed to the Green Continent.  EU foreign affairs chief, Federica Mogherini, announced in Brussels that the training of the Libyan coast guards to stop refugees and asylum seekers from reaching the EU had begun.