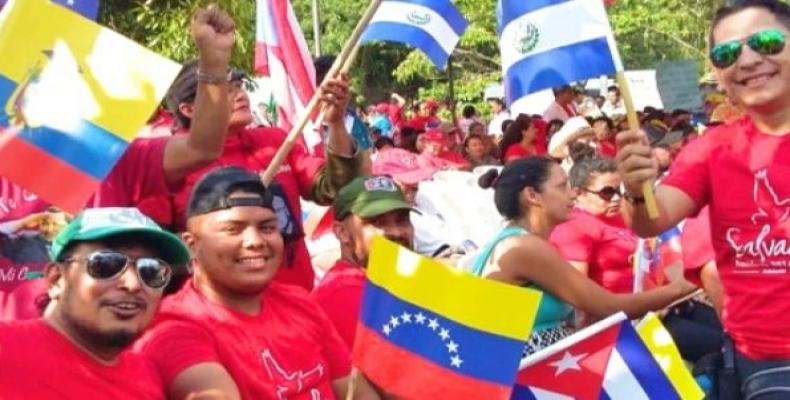 San Salvador, May 3 (RHC)-- Foreign ministers from the region held a special session of the Community of Latin American and Caribbean States, CELAC, on Tuesday.  The meeting, which took place in San Salvador, was convened to discuss the situation in Venezuela.

El Salvador holds the pro-tempore presidency of the organization, which is made up of 33 countries of the region.  At the opening session, Salvadoran President Salvador Sanchez Ceren said: "We are with you, the people of Venezuela," noting that “El Salvador was able to overcome an internal armed conflict for more than a decade through dialogue.  We believe Venezuela can, too."

The encounter, called to review threats to Venezuela's constitutional order and interventionist actions challenging its independence, sovereignty and self-determination, included the participation of representatives from 26 countries.

Reaffirmed during the meeting was the importance of CELAC as a space for regional countries to discuss their true interests, rather than deal with the Organization of American States (OAS) and the United States which has historically abused and dominated the region.

In their comments, participants at yesterday's meeting condemned the wave of violence unleashed against Venezuela's constitutional order.  At the same time, the gathering expressed support for the call made by Pope Francis to promote dialogue, as well as work being done by a group of former presidents and efforts by the Bolivarian government toward this end, in addition to President Maduro's decision to call a Constituent Assembly.

Salvadoran Foreign Minister Hugo Martinez said the meeting analyzed the escalation of violence instigated from abroad and unleashed by opposition groups, and the interference of the secretary-general of the Organization of American States, Luis Almagro.

Caracas requested the meeting last week, just before Venezuela announced plans to leave the OAS, which has been trying to promote a coup against President Nicolas Maduro and encourage foreign intervention.

Almagro has repeatedly called for the Democratic Charter of the OAS to be applied against Venezuela due to its internal political situation, which would have led to its suspension from the organization.