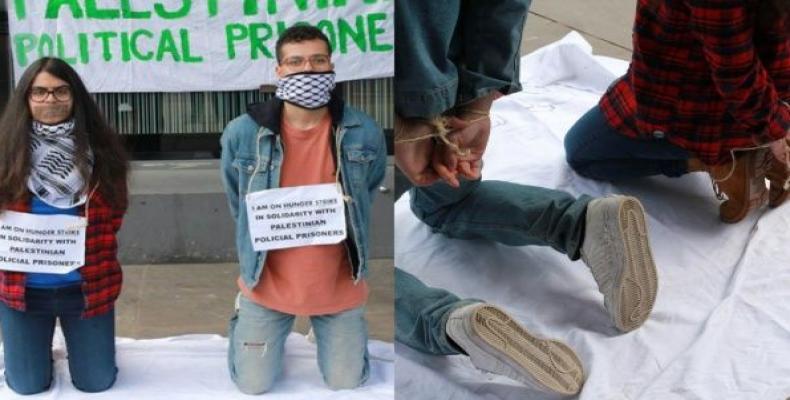 Brussels, May 8 (RHC)-- Human rights advocates and groups from across Europe are sacrificing their health for the sake of solidarity, refusing food and joining the indefinite hunger strike by 1,700 Palestinian political prisoners.

The hunger strikers hope to highlight the horrific and unlawful conditions faced by Palestinians in Israeli jails, as well as the racist dispossession faced by the people of Palestine.  Advocates from cities across the continent hope the campaign will build upon mounting international pressure on Tel Aviv to end the inhumane treatment of Palestinian detainees.

The prisoners' hunger strike, organized as the “Strike for Dignity and Freedom,” is now in its third week.  The collective action unites various Palestinian resistance movements ranging from the Popular Front for the Liberation of Palestine, PFLP, to Islamic Jihad and Hamas, and is being led by respected political prisoner and leader Marwan Barghouti.  The 58-year-old leader has been held in the dungeon-like prisons of the occupation since 2002, serving five life sentences for illegitimate and illegal charges of murder.

“We stress our determination to undertake this struggle whatever the cost, and we have no doubt that the Palestinian prisoners will be steadfast and prevail,” Barghouti wrote in a recent letter that was read by his wife, Fadwa, to thousands of assembled supporters at the Nelson Mandela statue in the West Bank city of Ramallah.

“Prisoners are proud to be part of this nation and its infinite resilience and they are proud to endure for our country, convinced that victory is ineluctable.”

Israeli Minister of Security Gilad Erdan, clearly shaken by the power of the hunger strike tactic, has even written opinion pieces published by the New York Times describing the action as a “new sort of suicide bombing to threaten the state of Israel.”

European hunger strikers, however, told teleSUR that they are intent on exposing the true nature of the colonial-settler state, as well as the vile conditions faced by Palestinian prisoners, including children, whose capture and detention is often of a completely arbitrary nature.

“For us, the important thing is to spread the news about the prisoners to people in our cities, where the media censors prisoners' voices,” said Alex Rosso, an organizer with student group Progetto Palestina, based in Turin. “The other central element is to show them solidarity, to make their fight stronger.” Rosso's group also supports the international campaign calling for boycotts, divestments and sanctions, or BDS, against the occupation of Palestine.

Activists from cities in Belgium, England, Ireland, Italy, Scotland, Spain and Switzerland are also participating. Organizers add that in the coming days, more cities are joining the coordinated action. While many of the groups involved in the campaign are from European universities, members of the Palestinian diaspora, independent collectives and political parties are also placing their health on the line for the sake of supporting the Palestinian prisoners' demands.

“No matter if we feel more tired every day, no matter if we have headaches, no matter if we feel dizziness, the important thing is the freedom and struggle for liberation and dignity by the prisoners,” Progetto Palestina member Sara A., a Palestinian in Turin, explained in a recorded message sent to teleSUR.  “We understand more and more the meaning of 'hunger strike,' even if it is completely different for them, it is (still) having a really, really bad effect on us.”

“But we will keep strong for them and for the struggle until their voices are heard here, we will keep up our hunger strike,” she added.  However, Rosso said that the groups have struggled to gain attention from the decidedly pro-Zionist bias nursed by Europe's press outlets.

“They try to ignore us or not give us space in the media,” he said. “Censorship is worse sometimes,” he added, noting that the silence extends to the Palestinian prisoners' actions as well.

University of Edinburgh student and hunger striker Daniel Yahia told Middle East Monitor that his college is heavily invested in corporations like Caterpillar that play a heavy role in “maintaining the apartheid regime.” At Yahia's university, Zionist groups are favored while those who support the Palestinian cause face suppression.

“As soon as Palestine is involved, censorship intensifies,” Yahia said, explaining how his organization, Communist Society, was disallowed from joining the students' association. A pro-Zionist public diplomacy group called the Israeli Engagement Society, however, was swiftly approved when applying for the student union.

The European hunger strike has also been accompanied by a trending social media campaign known as the “Salt Water Challenge,” which was launched by Barghouti's son, Aarab Marwan Barghouti.

Echoing the viral ALS Ice Bucket Challenge of 2014, the challenge entails supporters of the prisoners posting videos of themselves drinking a mixture of salt and water while calling on their friends and contacts to do the same. Prisoners refusing to eat food have been resorting to the consumption of saltwater solutions as a means to maintain their health.

All over the world, people are rallying to the prisoners' cause and are blasting the colonial inhumanity of the Israeli occupation of Palestine. European Parliament members have staged sit-ins, labor unions in Morocco have rallied while burning the flags of the Israeli state and vigils have been held opposite Israeli embassies across the globe.  On Sunday, the solidarity group Ecuador for Palestine held a performance depicting the plight of hunger strikers in the Andean capital Quito's Independence Square.

Faced by the peaceful and persistent resistance of the uprooted and oppressed Palestinian people, the Israeli state is increasingly confronted by collapsed public goodwill and an unprecedented crisis of legitimacy.