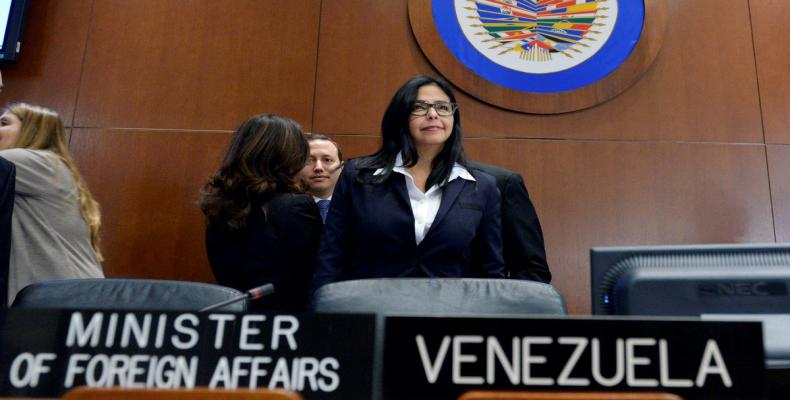 Washington, June 2 (RHC)-- The Organization of American States has suspended its meeting called to discuss the political and economic situation in Venezuela, with the interventionist motion led by the U.S. failing to gain the required majority to pass.

The Caribbean community played a vital role in defeating the anti-Venezuela motion, calling for further discussions and another meeting, which is yet to be set.

Shortly after the meeting, Venezuela's Foreign Minister Delcy Rodriguez stated that the "interventionist bloc in the OAS continue to be defeated by the honorable states of the region," announcing that she herself will attend the OAS general meeting set for June 19th through the 21st, in Cancun, Mexico with the support of the people of Central America, the Caribbean, ALBA nations and all of Latin America.

The government of President Nicolas Maduro has been under attack by OAS chief Luis Almagro, who has vocally backed Venezuela's opposition and promoted foreign intervention in the country, leading Caracas to begin the process of withdrawal from the international body.

Representatives of some right-wing governments in the region, such as Mexico, Brazil, Colombia, Paraguay and Argentina continued their actions against Venezuela during the meeting of foreign ministers. Brazilian Foreign Minister Aloysio Nunes Ferreira Filho said in his address that the Venezuelan government must call "free elections," with a "fixed schedule."

Meanwhile, diplomats from Bolivia, Nicaragua, Ecuador and other nations rejected the meeting as an intervention in the internal affairs of the South American country.  "The OAS can not continue to be used by a country for a political lynching against the government of Venezuela.  It is regrettable that a group of brother countries has been biased in their appraisals and focus," said Nicaraguan Ambassador Luis Ezequiel Alvarado.

Bolivian Foreign Minister Fernando Huanacuni condemned what he considered an intervention, saying: "The countries of the region do not need protectorates or tutelage.  Nothing that we do will be useful without the participation of Venezuela."

Antigua and Barbuda's Prime Minister Gaston Browne urged his fellow Caribbean nations that "any covert attempts, to directly or indirectly interfere in the internal affairs of Venezuela, to engineer regime change should be resisted."

The meeting, entitled: “The Situation in the Bolivarian Republic of Venezuela,” had three separate proposals for OAS action on Venezuela.

A draft declaration submitted by Peru, Canada, the United States, Mexico and Panama called for, among other actions, "a halt to the convocation of a national Constituent Assembly as presently conceived," aimed at condemning the process to rewrite the Venezuelan Constitution that Maduro announced earlier this month.  A similar draft position from Antigua and Barbuda also proposed calling for the Constituent Assembly to be suspended, but the country withdrew its proposal during the meeting.

Meanwhile, a proposal from the Caribbean community does not propose calling for a move to halt the Constituent Assembly process, but rather urges the "establishment of concrete plans for the restoration of peace and stability as soon as possible."  Caricom also called for asking Venezuela to reconsider its decision to withdraw from the regional organization.

All three draft declarations called for an end to violence in the country and for a commitment from all parties to take part in a renewed dialogue process to ease political tensions.  Talks between the government and the right-wing opposition broke down in January after parts of the fractured opposition repeatedly boycotted the talks.

The day’s plenary session was attended by 34 of the Organization of American States' 35 members at its headquarters in Washington, which began with a private meeting closed to the press. Although Venezuela considered the meeting an attack on its sovereignty, it decided to attend the meeting.

Any proposals will need the vote of two-thirds of the representative, and many predict that considering divisions over the issue within the bloc, this will not be an easy feat.

The call for an assembly was agreed upon on April 26 by 18 states, the minimum needed for the proposal to be put in motion, which triggered Venezuela's election process.  Since then, ambassadors of the OAS have been convening both privately and publicly to prepare and strategize the best way to present current issues and bring members opposing the consultation together.