Movements Call for 'World Without Walls' to Fight Global Crises 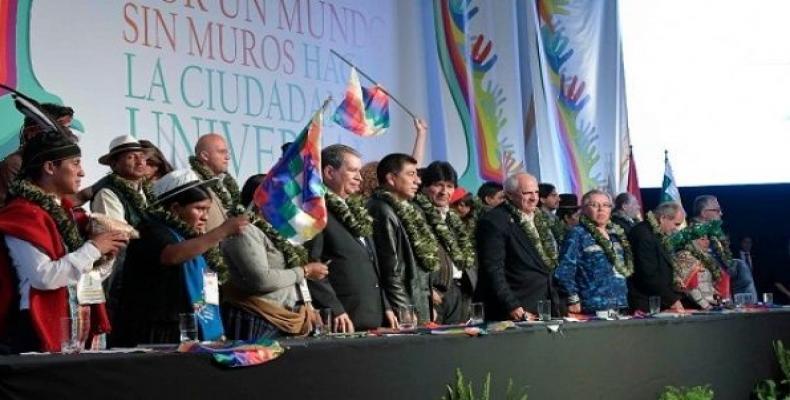 Cochabamba, June 23 (RHC)-- At the closing of the World Peoples' Conference in the city of Tiquipaya, Bolivia, social movements called for a “world without walls,” while Bolivian President Evo Morales urged social movements to adopt the progressive proposals of the gathering's final declaration, which dubbed the migration crisis as just one symptom of neo-liberal globalization.

The Tiquipaya Declaration resulting from the two-day conference established a number of proposals that call for tearing down walls and building universal citizenship as foundations for pushing back against the rising tide of criminalizing migration.

"Human mobility is a right rooted in the fundamental equality of human beings," read the final declaration.  "However, in most cases, it is not a response to people's voluntary decision but situations of need that reach extremes of forced migration."

"Building true peace, which isn't only the absence of war but also overcoming structural violence, to translate into equitable access to wealth and opportunities for development," the declaration continued.  "We have outlined as main causes of this crisis war and military interventions, climate change and the enormous economic asymmetries between and within states."

"Planet or death, we will win!  #WorldWithoutWalls"

Among the declaration’s various proposals was a call to create a Global People's Ombudsman, an entity that would ensure the rights of migrants, refugees, asylum-seekers, stateless persons and victims of trafficking.  It also demanded that public expenditures for war and the criminalization of migration be used to create "integration programs that guarantee the full exercise of the rights of migrants and their families," condemning criminalization and detention of migrants as misguided approaches.

Bolivia’s minister of government, Carlos Romero, told the 1,500 delegates from Bolivia and some 700 foreign delegates from more than 30 countries: "We must take our voice to the United Nations, to the G-77 plus China, to the European Union, to the South American Parliament, to … boost the united voice of the people.”

The conference, the third of its kind put on by Morales, began on World Refugee Day with an implicit critique of U.S. President Donald Trump's xenophobic policies, epitomized in his chief campaign promise of building a massive wall along the 1,954-mile border with Mexico.

"In Latin America, invasions and colonization have imposed borders upon us," Morales told the delegates.  "An illegal human being cannot exist in the world -- a human being without community, without freedom, without citizenship."  "Walls are an attack against humanity," he continued. "Walls don't protect."

Morales also assured that with the unity of social organizations and leftist political parties, revolutions in the world would be "unstoppable" and highlighted the struggle and victories of the Bolivian people as an example against the aggressions of both capitalism and imperialism.