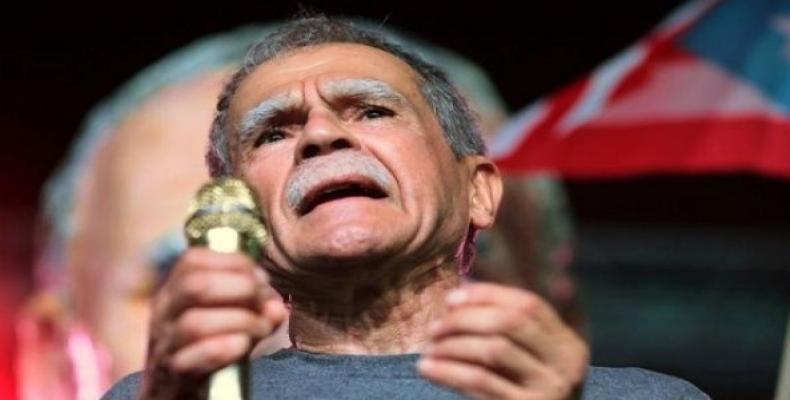 The community is undertaking an active struggle against the Fortune 500 company's poisoning of the area.  The production of coal waste has caused serious health issues for the people in the area, ever since last year a quietly made deal between the United States Environmental Protection Agency and the Puerto Rico Electric and Power Authority removed a clause in AES's contract that prohibited coal ash dumping on the island.

The company has saved millions of dollars by putting their toxic waste in public landfills, to the detriment of people's health. Many citizens report respiratory problems, and even boosts in cancer rates as a result.

“If we fight, let us triumph.  We need to decolonize our spirit... Without struggle there is no victory,” the independence fighter told reporters.  He called on the Puerto Rican people to join together in civil disobedience against AES.  “I would like the Puerto Rican community to be here,” he said.

Protests have been ongoing since last year.  In November, a Puerto Rican Independence Party Senator, Maria de Lourdes Santiago, was among 41 arrested during protests against AES.  Demonstrations also occurred in Humacao, where AES is also actively dumping ashes.

Oscar Lopez Rivera spent 36 years in U.S. prisons on alleged conspiracy charges.  He has long been a leader and hero of the Puerto Rican movement for independence from its status as a U.S. colony.  The remainder of his sentence was commuted by former U.S. President Barack Obama, after years of calls from activists for his release.  Since his release, he has promised to continue struggling for the right to self-determination of Puerto Rico.