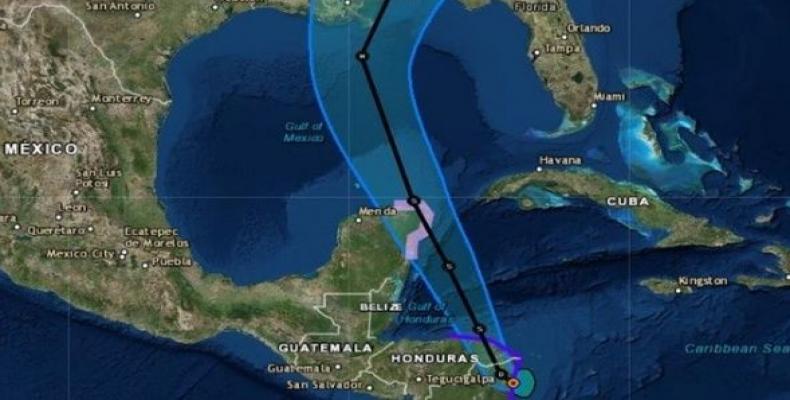 Miami, October 6 (RHC)-- Weather reports warn that the tropical depression spiraling through the northwestern Caribbean sea has upgraded to Tropical Storm Nate, with a hurricane watch on Mexico's Yucatan peninsula.  The storm reportedly could hit the Gulf of Mexico by early Sunday morning.

Costa Rica, Nicaragua and Honduras are currently weathering through some heavy rainfall that triggered flood warnings as the tropical storm hit Central America.

With current sustained winds of almost 70 kph, Nate is traveling northwest at 12 kph, although weather experts at the National Hurricane Center warned it will pick up speed as it takes a more north-northwestward direction.

Forecasters say the storm is expected to strengthen as it enters into warmer waters, although exact details on location, time, and magnitude of when Nate will reach the U.S. is still unknown.  However, current calculations show the storm will hit Mexico's coast and the U.S. southern states of Louisiana and Mississippi.

"Since the system will be moving over very warm waters, we could quickly have a powerful hurricane on our hands," according to AccuWeather.

"In all likelihood, this storm will impact areas not severely impacted by Harvey or Irma.  The extent of the damage will depend, of course, on the precise path and whether the storm intensifies beyond a Category 1 storm," the statement said.

"Residents along the Gulf Coast from Louisiana through the Florida Panhandle should monitor the progress of this system and heed any advice given by local officials," the National Hurricane Center said.

By Sunday, the storm is expected to reach as high as 120 kph and although its velocity is far from its sister hurricanes Irma and Maria, forecasters warn residents to be careful of flash floods, mudslides, and heavy rains.

The Hurricane Center is predicting around 40 to 50 centimeters of rain in the Pacific coast of Central America, particularly Nicaragua.