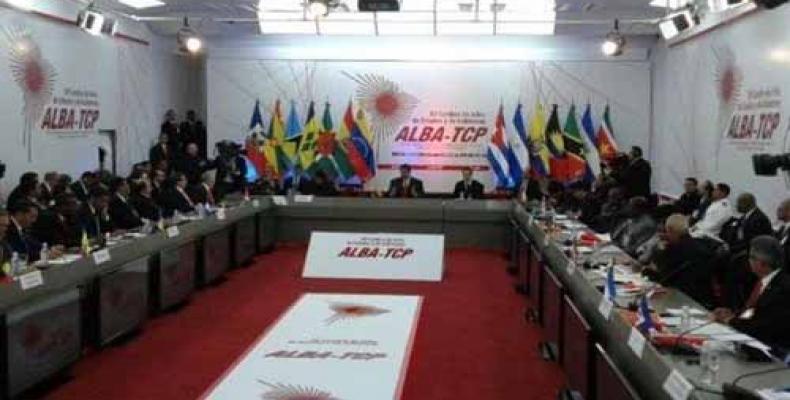 Caracas, March 6 (RHC)-- The summit of presidents of the Bolivarian Alliance for the Peoples of Our America, ALBA, was held in Caracas on  Monday, moments after Venezuelan President Maduro addressed Venezuelans alongside leaders of Latin American and Caribbean member states who were attending the meeting.

Leaders arrived in the capital Caracas Monday morning and criticized the U.S.-led attacks against Venezuela's sovereignty, while honoring late President Hugo Chavez on the 5th anniversary of his death.  Puerto Rican freedom fighter and former political prisoner Oscar López Rivera also attended the ALBA summit as he completes his tour in Venezuela.

"Five years ago I had to give the hardest news of my life.  Five years later we remember Chavez, no longer with tears, but with a smile and commitment to the future of the Fatherland," Maduro said marking the 5th anniversary of the death of late President Chavez before kicking off the ALBA summit.  "Today with more security and strength than ever we say that the Venezuelan people are more Chavista than ever.  Chávez lives!"

"On Sunday, May 20th we will have elections. We are deciding between peace and violence; democracy or coups; between the independence or the submission of the Fatherland," the president added referring to the upcoming presidential election in which he is a candidate.

During his opening address to ALBA, Maduro gave a warm welcome to Puerto Rican independence hero Oscar Lopez Rivera at the ALBA summit.

He went on to call for more ALBA meetings in order to address "vital issues for the Latin American and Caribbean region."

"ALBA has the need to meet in a periodic way, work meetings that allow us to advance in the political, economic challenges of our people," he added at the group's 15th meeting taking place at Miraflores Presidential Palace.

The Venezuelan leader further denounced attacks against his country by regional right/wing governments. "We have been discussing the theme of the Summit of the Americas.  We discussed the illegal attempt of the Government of Peru to discriminate against Venezuela and prohibit the participation of our country."  Maduro stressed that "Venezuela will not be shut up by anyone."

Raúl Castro then addressed the leaders at the opening session of ALBA saying that threats against Venezuela also threaten peace throughout the region.

"We proclaim the unwavering support for the Bolivarian Revolution and the civic-military union of its people commanded by comrade Nicolas Maduro," Raúl told his counterparts at the summit. "The United States, since 1999 when Comandante Chavez become president, has resorted to methods of unconventional warfare in order to subdue this country, which owns enormous natural wealth."

He added that only the people of Venezuela can solve any problems faced by their nation and further denounced Peru for attempting to prevent Maduro from attending the Summit of the Americas.

Nicaraguan President Daniel Ortega echoed a similar sentiment as he hailed the legacy of Chavez recognizing that ALBA and other regional independent organizations would have never been possible without the late leader’s efforts. "The U.S. tries again to provoke the disintegration of what we have managed to build...This is a disrespectful attitude to the people of Venezuela and Latin America."

“We see clearly the attempt to delegitimize the revolutionary process of Venezuela that has been advancing in spite of challenges and difficulties.  In the face of violence, the people have always called for peace,” Ortega stressed.

Dominica’s Prime Minister Roosevelt Skerrit also recognized the legacy of Chavez before slamming intervention attempts into the internal affairs of Venezuela. “Peru's attitude is a flagrant violation of international law. They are denying the people of Venezuela their right to participate. We condemn this decision.”

Bolivian President Evo Morales then took the stage calling on leaders to “strengthen our unity as countries that seek equality for humanity.” He then slammed the complicity of some regional governments in the attacks on Venezuela. “I cannot believe that some Latin American presidents are instruments of the American Empire.”

Meanwhile, Ecuadorean Minister of Defense Patricio Zambrano said the Summit of the Americas should be a space for meeting and dialogue between countries, "and not an organism of exclusion." Zambrano's comments were echoed by the head of the delegation of Saint Vincent and the Grenadines who slammed what Peru is doing as “an attack on the Latin American unity that we can not allow.”

The Saint Vincent delegate further called on President Maduro to “continue with the legacy of Chavez, you have suffered unthinkable pressures, you have joined the people of Venezuela.”