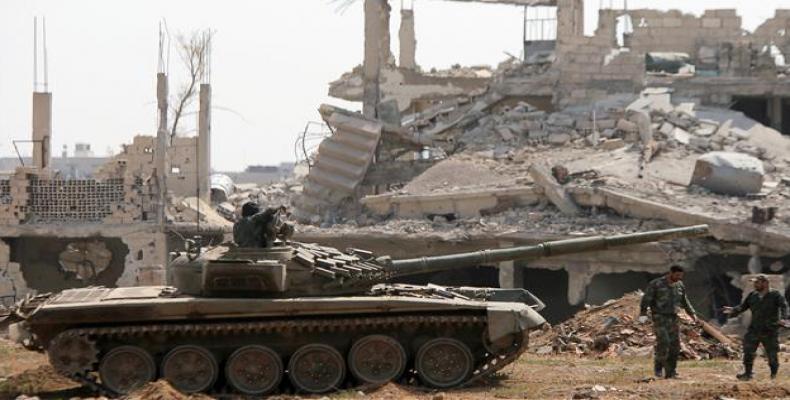 Damascus, May 22 (RHC)-- The Syrian army says it is in full control of the capital city and its outskirts after ousting terrorist members of Daesh Takfiri group by fully cleansing their last strongholds around Damascus.  Issuing a statement on Monday, the General Command of the Syrian Army and Armed Forces said complete security was restored to Damascus and its countryside after al-Hajar al-Aswad district and al-Yarmouk Camp were totally purged of terrorists. The development was preceded by cleansing Yelda, Babila and Beit Sehem districts in southern Damascus.

The Syrian army’s general command added that the new victory was particularly important, because it signified the total elimination of terrorist organizations around Damascus.  It added that the entire towns of Western and Eastern Ghouta are now completely clear of Takfiri terrorism.

Earlier in the day, Syrian Air Force military aircraft had struck militant fortifications in al-Hajar al-Aswad amid a collapse in terrorists’ ranks.  Infantry units stormed the building blocks in which terrorists had taken position, engaging in fierce exchanges of gunfire with the Takfiris and chasing them along narrow streets.

Syria has been gripped by foreign-backed militancy since March 2011.  The Syrian government says the Israeli regime and its Western and regional allies are aiding Takfiri terrorist groups that are wreaking havoc in the country.  The Syrian government, backed by Russian warplanes, has managed to liberate swathes of territory it lost following the outbreak of the crisis from the control of the terrorists.

Since February, the Syrian army, backed by Russia, has been engaged in a major push to rid Damascus and the surrounding areas of terrorist groups.  In a significant victory early last month, the Syrian army managed to fully liberate Eastern Ghouta, which had long been controlled by militant groups and served as a launch pad for deadly rocket attacks against residents and civilian infrastructure in the capital.