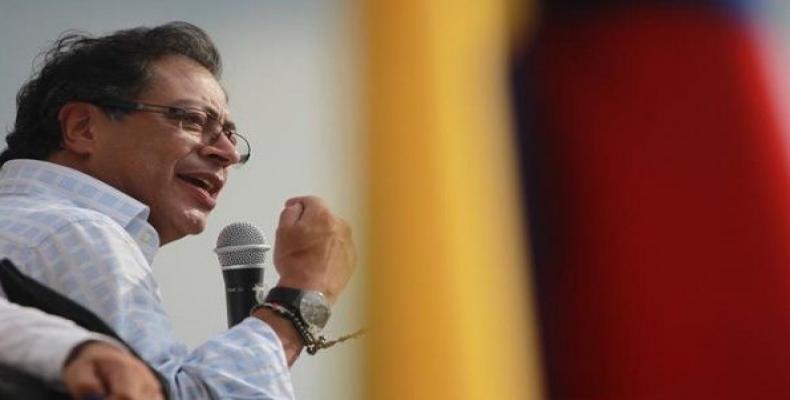 Bogota, June 13 (RHC)-- With just a few days left before Colombians go to the polls to select the country's next president, progressive candidate Gustavo Petro is warning voters casting blank ballots.  Speaking in a recent interview, Petro, who has significantly closed the gap in support between himself and right-wing candidate Ivan Duque, said recent polls have spoken the majority of Colombians did not support Duque but said a high number of blank ballots in the election could hand victory to the Alvaro Uribe-backed candidate.

"The majority of (Colombians) are pro-change, against the political machinery, and are anti-corruption," Petro told Colombian newspaper El Espectador adding: "If an important percentage of the population votes blank, Duque wins, and we head to a dictatorship.”

A series of polls published in the last week have shown Petro trailing behind Duque by between thirteen to five percentage points.  All of the surveys, however, feature a high percentage of the population intends to abstain from the vote, cast blank ballots, or are undecided.

Former presidential candidates such as Sergio Fajardo and Humberto De la Calle, have stated their intention to decide to cast blank ballots, arguing that the remaining candidates do not represent their views.  Petro also said, however, the belief that a center-left option would have been able to win the next elections is delusional.  “If they (Uribismo) regain the government, which they lost due to a court’s decision, they know what they have to do: get rid of the courts,” Petro explained.

Duque is former president Uribe’s protege, and Uribe along with his party, the Democratic Center, won the legislative majority in the March congressional elections.  If Duque wins, the conservative movement known as Uribismo will have a hold on the executive and legislative branches.

Furthermore, Duque has vowed to reform the justice system if elected.  The reform would eliminate the Supreme Court, the Constitutional Court, and the Special Jurisdiction for Peace (JEP) and unify them into one single high court.

Political opponents have criticized the proposal, arguing it would severely hamper citizens' protection mechanisms and threaten the peace process by discarding a crucial part of the Peace Accords with the FARC: the JEP.

Others believe the judicial reform will serve to directly benefit Uribe, who has 28 ongoing legal proceedings for a series of crimes, including false positives, the death of a human rights defender, illegal wiretapping and the massacres in La Granja and El Aro perpetrated by paramilitary groups in the 1990s.

“There lies my anguish: we are before a historic opportunity, the kind that appears every 70 or 100 years. The last was when Gaitan was going to be president and was murdered,” Petro affirmed.