Tens of thousands protest separation of migrant families in U.S. 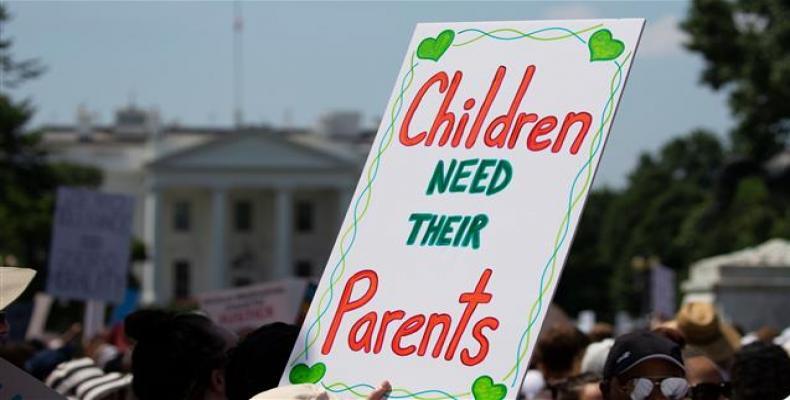 Washington, July 2 (RHC)-- Tens of thousands of protesters poured into the streets across the United States on Saturday for a national day of action protesting President Donald Trump’s “zero tolerance” immigration crackdown.  Organizers say there were up to 700 rallies nationwide, including on the U.S.-Mexico international bridge in El Paso, Texas.

The rallies came 24 hours after the Trump administration claimed in a court filing that it has the right to jail migrant families indefinitely, despite a 1997 court settlement that says the government must release migrant children from detention within 20 days.

From coast to coast this weekend, protesters demanded an end to family separation and family detention.  In Washington, DC, thousands poured into Lafayette Square, across from the White House, to chant “We care” and “No Trump, No KKK, No Fascist USA.”  Protesters waved signs in English and Spanish.  The slogan on one English sign demanded: “Where are the children?”  Another sign said: “Melania & Ivanka, stop the child abuse.”

While President Donald Trump and First Lady Melania Trump avoided the chants in Washington, the protests followed them to their weekend retreat in Bedminster, New Jersey.  Only a few miles from Trump National Golf Course, more than 100 protesters lined the side of a major New Jersey highway waving anti-Trump signs and chanting: “Where are the children!”

In Atlanta, Rep. John Lewis, the civil rights icon who once marched with the Rev. Martin Luther King, roused the crowd with by imploring the protesters: "Don't give up, don't give in — keep marching."  The Democratic congressman said every American — Asian, Black, white, Hispanic — all trace their heritage to immigrants.

"Maybe our foremothers and forefathers all came to this land in different ships, but we are all in the same boat now," he said.  He also emphasized the political underpinning of the nationwide rallies, calling on demonstrators to make their voices heard in November.