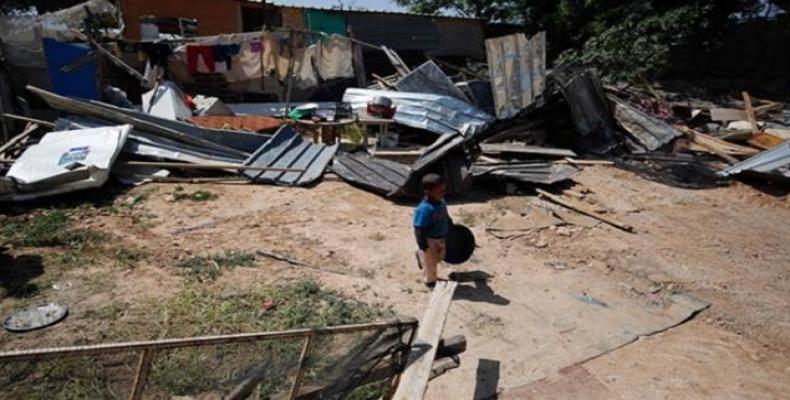 Heavily armed Israeli forces used several bulldozers and stormed Nakheel, declaring it a closed military zone.  According to sources, the Israeli Municipality of al-Ramla ordered the demolition of the family home belonging to Nayef Abu Amer, claiming that it was built without the difficult-to-obtain Israeli building permit.

They added that Israeli army forces prevented residents of the Palestinian-owned home from accessing the area while the Israeli bulldozers carried out the demolition.

Since 1967, the Israeli regime has been enforcing the draconian policy of demolishing the homes of those Palestinians who are deemed by Tel Aviv to be behind fatal attacks against Israeli settlers.  The practice, however, was temporarily halted from 2005 to 2014, with the exception of 2009, when scores of homes were sealed and razed in East Jerusalem.

Nevertheless, in 2014 Israeli Prime Minister Benjamin Netanyahu announced as a policy the resumption of demolitions in the occupied West Bank.

Israeli law guarantees Palestinians the same equality as other citizens; however, there are cases of discrimination in government funding and a raft of other issues in practice.  Palestinians in the occupied territories are facing a difficulty to obtain building permits, making them expand or build homes and structures without permits.

The United Nations Office for the Coordination of Humanitarian Affairs (OCHA) also said in July that Israeli authorities demolished 197 Palestinian structures in the West Bank during the first half of 2018.

Back in April, Human Rights Watch (HRW) denounced the demolition of Palestinian schools by orders of Israeli authorities in the occupied West Bank, saying the move is part of a discriminatory planning system which amounts to a war crime.

"Israel has repeatedly denied Palestinians permits to build schools in the West Bank and demolished schools built without permits, making it more difficult or impossible for thousands of children to get an education," the U.S.-based rights organization said in a detailed statement.