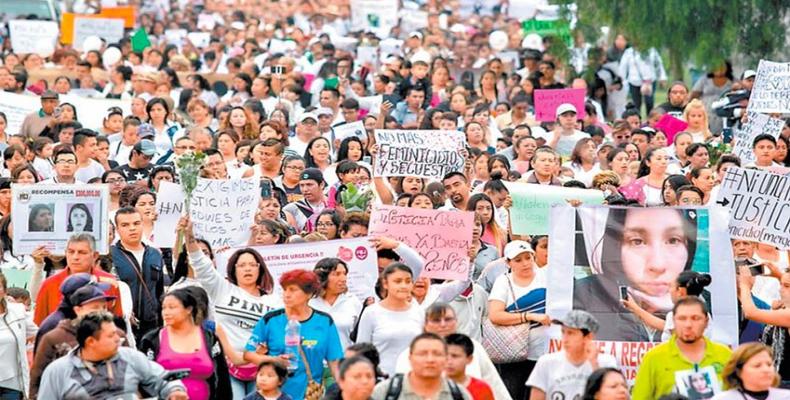 Mexico City, October 11 (RHC)-- Over 1,500 women marched through the streets of the Ecatepec neighborhood of Jardines de Morelos in Mexico to condemn the disappearance and murder of at least 20 women from the municipality.

Protesters, including the president of the State of Mexico's congress, Azucena Cisneros Coss, chanted slogans or carried signs including the statement “Ni una más” — not one more (femicide victim) — as they marched.

Concern about the scourge of gender-based violence first spread in the neighborhood in 2015 when the remains of several women were found, and reemerged recently after a couple, arrested last week in Mexico state, confessed to killing at least 20 women, sexually abusing several of them, and selling their body parts and belongings.

Mexican state authorities had placed the couple under surveillance as part of an investigation into the disappearance of three women and a two-month-old baby in April, July, and September this year.  The couple later admitted to selling the baby girl for 15,000 pesos (USD $800).

Participants in the march expressed their disgust with the lack of action on femicides, which they say is of particular concern in Ecatepec.  The demonstrators walked along Nicolas Bravo avenue towards the corner of Playa Pie de la Cuesta street, where the ministerial police found human remains following the confession from the couple, who have only been identified as Juan Carlos and Patricia.

The march was followed by a candle vigil and the laying of a bouquet of flowers.  Participants later declared the day a day of mourning.  They have called on the Mexican prosecutor's office to bring out "the truth about the homicides" and state, federal and municipal governments "to face society, which is already tired of the levels of insecurity and injustice" in the country.

Hours earlier, on the main promenade of the municipality, local deputies and elected officials of the Morena party held a rally to demand the resignation of the FGJEM femicide prosecutor Dilcya Espinosa, and immediate action on crimes of this nature.

Cisneros also criticized the state Public Security Secretary Maribel Cervantes Guerrero, claiming that she has never set foot in Ecatepec despite 40% of the state’s crime occurring there.  “I’m not exaggerating by saying that we are in a deep security, social and economic crisis,” she said.

The Mirror reported that Juan Carlos confessed to murdering the women, performing necrophilia, and then cutting them up into pet food, and using their skin as a mix for plant fertilizer, while keeping their organs in formaldehyde-filled bottles to be sold.  Many of the women were lured to their deaths by his wife, who claimed to be a clothes retailer.

Psychiatrists, who assessed Juan Carlos, said he appears to be suffering from a personality disorder and could be considered a psychopath, while also determining his wife was born with a type of mental illness.  Medical professionals have, however, determined both could distinguish from right and wrong.

The couple was arrested on October 4th by agents of the prosecutor’s office after an investigation was launched into the disappearance of several women in Ecatepec during the months of April, July, and September.

There were at least 2,585 murders of women in Mexico in 2017, according to official statistics, and of the total, Mexico state recorded the highest number.