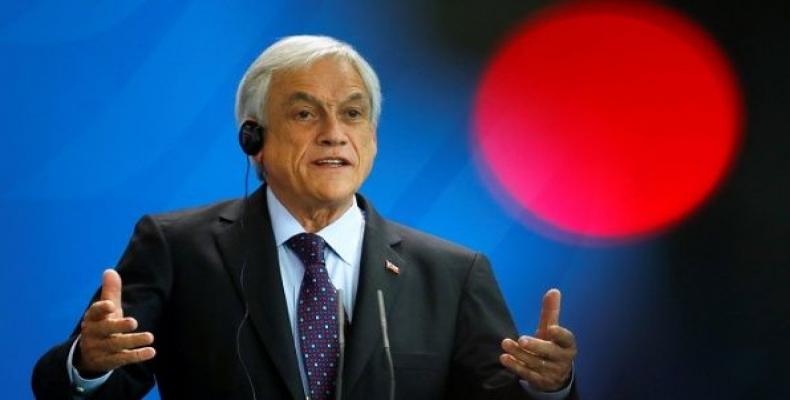 Santiago de Chile, October 31 (RHC)-- Opposition parties in Chile and the movement No + Pension Funds Administrators (AFP) have reiterated their rejection of the pension reforms proposed by President Sebastian Piñera.

Pensioners demonstrated in the streets of Santiago to reject the reforms.  “We are demanding a pension system that allows, at the end of our working lives, a dignified life,” Carolina Espinoza, leader of the No + AFP told local media.
On October 24th, hundreds of protesters demanded an end to the AFPs.  Twelve people were arrested in the midst of a repressive police operation to keep the protesters from reaching Chile’s presidential palace, La Moneda.

Earlier this week, Piñera announced a set of reforms to the pensions system but opposition parties and social movements are not satisfied.  “More than solving the drama of precarious retirement pensions, the government’s reform maintains and strengthens the AFP model, it keeps the pensions subjected to the market’s will and it does nothing more than to place obstacles and locks against any reform against the individual capitalization system,” the No + AFP movement contended in a public declaration.

The core of the proposal includes a four percent increase in the monthly contribution to the pensioner’s account that would be charged to the employer and a 40 percent increase for Chilean who decide to push back their retirement five years.
Opposition legislators of the Labor Commission criticized the proposed reforms arguing they seek to exclusively benefit the private sector represented by the AFPs.  The commission’s president Gaston Saavedra stressed that Chileans want a different, non-private, pension system and dismissed the announced 40 percent increase in pensions for the lowest pension tier, explaining it would not be enough to lift them above the poverty line.

Gael Yeomans of the Left Libertarian party said the reforms do not respond to the pensioners’ demands for structural changes to the current individual system.  “The bill will deepen the pension business and more AFPs. When they announce the opening competition for new actors, of an extra four percent, that is a call for the same groups, the same owners of the AFPs to return as insurance companies, banks, and others to manage the money of the Chilean people,” Yeomans said in Congress.

The president of the National Pensioners’ Union (UNAP), Francisco Iturriaga, urged the government to approve policies to promote socio-economic well-being for Chile’s pensioners, including the elimination of the value-added tax on medicine and universal access to urban transportation.

The No + AFP movement also urged the government to reveal the proposal in detail before sending it to Congress in two weeks but insisted that “if there is no solidarity and distribution component in the pension system reform, there is no possibility of real improvement.”

They also requested that the government and legislators meet with them and listen to their demands and proposals.  “Today the reforms would not be under discussion if millions of Chileans had not gone into the streets to demand better pensions and to say No+AFP. If you don’t listen to the voice of the people, it will, in an exercise of their rights, search for the paths that will allow them to get their demands.”