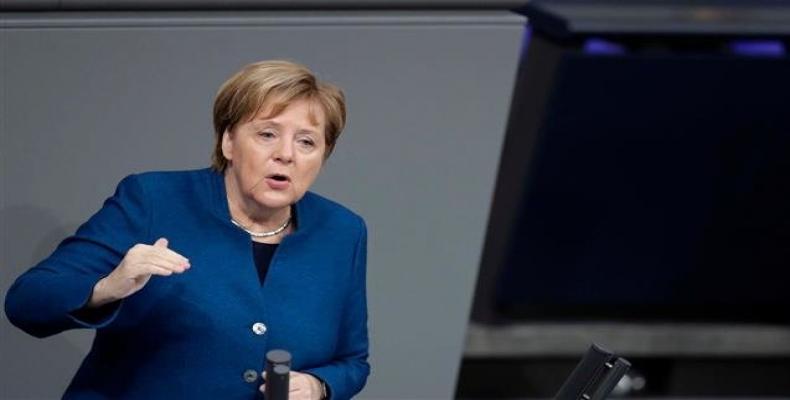 Berlin, November 22 (RHC)-- Germany's Chancellor Angela Merkel has made a speech in defense of a United Nations agreement on migration and accused its opponents of “nationalism,” while apparently criticizing U.S. President Donald Trump over his immigration policies.

In her speech to the Bundestag lower house of parliament on Wednesday, the chancellor said: “There are people who say they can solve everything themselves and don’t have to think about anyone else, that is nationalism in its purest form.”

She also rejected calls from nationalist lawmakers for Germany to drop its support for the pact, which she said was in Germany’s interests and would not infringe on national sovereignty.  The pact would regulate the treatment of migrants worldwide.

Merkel said it would ensure “reasonable conditions” elsewhere that already exist in Germany, such as the right for migrants to access health services and get financial support.

The chancellor said the agreement was an example of the way in which global problems can only be solved through international cooperation. She said in 2015 Germany realized that the problem of flight and migration had to be tackled at an international level, that “no one country can do it alone.”

“This pact for migration, like the refugee pact, is the right attempt to find solutions for global problems internationally, together,” Merkel said to heckles from the Far-right Alternative for Germany (AfD) lawmakers.

“The debate about a global pact for migration, for orderly, legal migration in a world where there are 222 violent conflicts ... 68.5 million refugees, 52 percent of whom are children, this organization plays a central role.”

The Global Compact for Safe, Orderly and Regular Migration (GCM) was approved in July by all 193 member states except the United States.  Hungary, Austria, Australia, Poland and the Israeli regime also later announced they would not back the pact, set to be signed next month in Morocco.

Under a new proposal, immigrants in the United States who get government benefits could be denied a green card.  U.S. President Trump has repeatedly pledged to make immigration to the United States more difficult, and reduce the number of people allowed to stay in the country.

The pact is a framework for cooperation and aims to reduce illegal migration, help integrate migrants and return them to their home countries. It asks backers to use detention only as a last resort.

In Germany, opposition to the pact has come mainly from the ADF, but a number of lawmakers from Merkel’s own party have also begun to question it.   German Health Minister Jens Spahn recently called for a broader debate about the pact and, if necessary, for a delay in approving it.  Spahn appears to be trailing other high-profile candidates in a bid to succeed Merkel as leader of her Christian Democratic Union party next month.

The chancellor denies she had made any mistakes with her open-door policy.