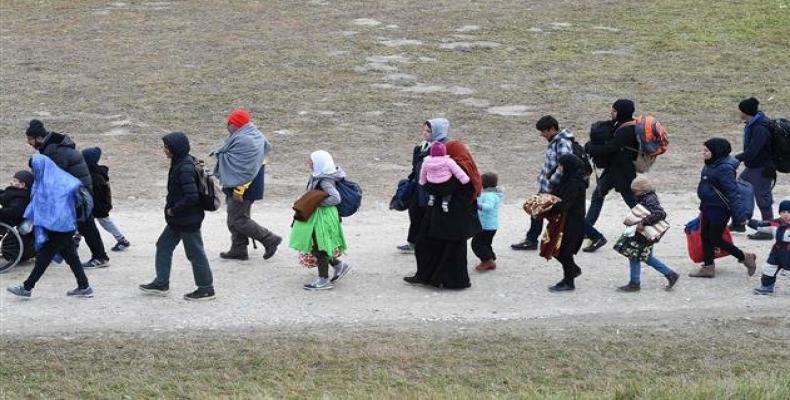 Vienna, November 1 (RHC)-- Austria has announced it will not sign a United Nations migration pact that is set to be adopted in December, in order to "defend its national sovereignty."

The United States and Hungary have already rejected the Global Compact for Migration, which aims to boost cooperation to address the world's growing number of migrants.

"The government has agreed... not to sign the United Nations pact and thus not to bind Austria," said a statement from the ruling coalition led by Chancellor Sebastian Kurz of the center-right OeVP, stressing "the importance of defending Austria's national sovereignty."

Kurz's coalition partner, the far-right Freedom Party (FPOe), has been pushing for Vienna to reject the pact.

The coalition, which took office last year, won votes on an anti-immigration platform following the 2015 surge in arrivals of asylum seekers.  "Austria rejects the possibility that the migration pact could establish new customary international law which would be binding on Austria or could be interpreted as such," Vice-Chancellor and FPOe leader Heinz-Christan Strache said in a press conference.

However, the UN has stressed that the pact is "non-legally binding" and "grounded in values of state sovereignty."

The opposition has accused the government of damaging Austria's international reputation by rejecting a pact that Austria had itself taken part in shaping while Kurz was foreign minister in the previous government.

Green MEP Michel Reimon said the decision showed that Austria "is not only part of the reactionary eastern block, but is actually leading it."

Austria has made a tough line on immigration a key focus of the rotating presidency of the EU which it holds until the end of the year.

The European Commission expressed its "regret" over Austria's decision.   "Austria has played an extremely constructive and key role in the negotiations on the global compact on migration, putting the position of the participating 27 EU member states forward, which is why we find the decision today regrettable," Commission spokeswoman Natasha Bertaud said in a statement.

The final text of the pact was agreed in July after 18 months of negotiations, and is set to be adopted during a conference in Morocco on December 10 and 11.   It lays out 23 objectives to open up legal migration and better manage migratory flows as the number of people on the move worldwide has increased to 250 million, or three percent of the world's population.