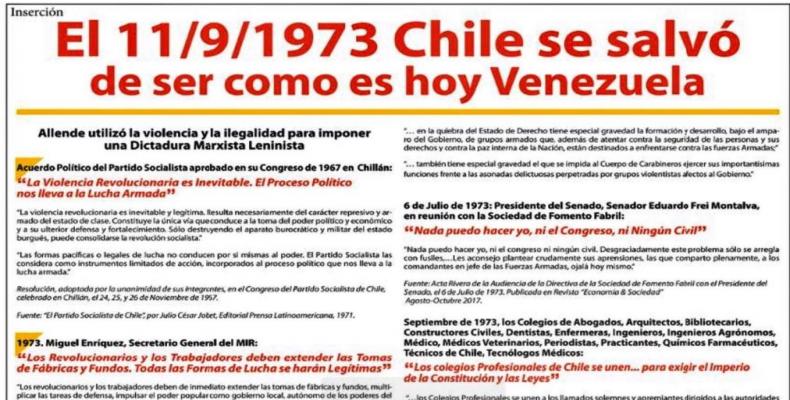 Santiago de Chile, September 13 (RHC)-- As Chileans remembered the victims of one of Latin America’s deadliest dictatorships, the right-wing national newspaper ‘El Mercurio’ published Wednesday a page-long insert justifying the dictatorship, starting with the headline that read: "On September 11, 1973, Chile was saved from becoming like Venezuela.”

The publication, which argued that the country was better off with the military regime, generated a massive outcry and rejection from various sectors of society.  The president of the Association of Relatives of Disappeared Detainees (AFDD), Lorena Pizarro, announced legal actions against the newspaper.

"That newspaper is condoning terrorism, while on the other side of that publication we have survivors, we have relatives who are directly affected by this new infamy," Pizarro added.

A total of 60 signatories paid around $20,000 U$D to have the insert published and for it to come out on the same date that the world regrets the events of September 11, 1973.  The rejection of the publication was massive in social media, to which the newspaper workers also joined.

"We are workers of El Mercurio and today we clearly express that the insert published today does not represent us," they wrote on Twitter.

On the same day, several right-wing legislators abruptly left during the minute of silence in tribute to the victims of the dictatorship held in Congress, while the Sebastian Piñera’s government decided not to carry out a commemorative act.

A common practice in Chile, as conservative economic and political elites continue to boast and publicly support the military dictatorship, which lasted 17 years.   The U.S.-backed coup on September 11, 1973, was the culmination of a long campaign of sabotage carried out by the local elite class alongside the U.S. administration of Richard Nixon who had said that Washington must "make the economy scream."

A key player before and after the coup was El Mercurio’s owner, Agustin Edwards, whose media group (radios and newspaper) received $1 million in 1971 from Nixon’s administration to print and promote anti-Allende stories.  With continued financial backing by the CIA into 1974, totaling around $2 million, the newspaper reported favorably on Pinochet’s regime in an effort to cement its control, as it was later declassified.

“He lobbied for a coup at the highest levels of the Nixon White House,” Peter Kornbluh, chief of the archive’s Chile Documentation Project, told the Washington Post after Edwards’ death in 2017. Kornbluh added that “he became the leading Chilean collaborator in CIA covert operations to overturn the democratic institutions of his own country.”

Following the coup, 30,000 were killed under Pinochet's rule, with countless tortured and disappeared as the right-wing dictator implemented neoliberal shock therapy to the Chilean economy.