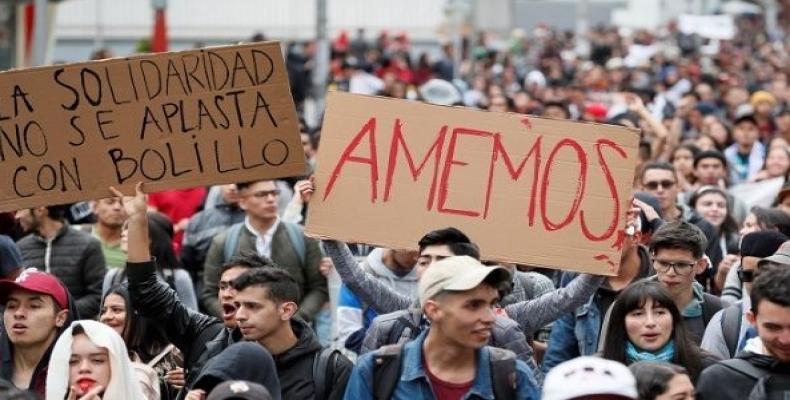 Bogota, September 29 (RHC)-- Thousands of Colombian students from public and private universities marched in Bogota on Friday to protest against police violence. Ironically, they were harshly repressed the security forces during the demonstrations.

"In response to repression experienced over the last week, students decided to mobilize in solidarity with the District University and defend higher education in Colombia," the Indigenous and Social Alternative Movement (MAIS) senator, Feliciano Valencia, said in a statement.  "We are going to change this country with you, young people!" he added.

On September 25th, the Colombian anti-riot police, the Mobile Anti-Disturbances Squadron (ESMAD), entered Bogota's District University, cracking down on students who were protesting against corruption within their educational institution.  A large number of human rights defenders, students and citizens were injured and captured during what began as a peaceful process.

Similarly, back on September 4, the ESMAD entered the University of Cundinamarca and began beating student protesters who were demonstrating the school's administration within the campus confines, leaving at least 12 students injured and another 20 detained.

The march was organized to express solidarity with people attacked by the ESMAD at both universities within Colombia's capital.