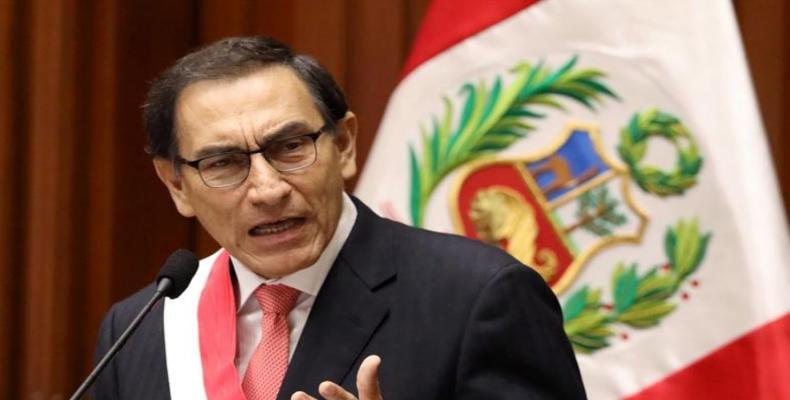 Lima, October 4 (RHC)-- Peruvian president Martin Vizcarra presented his newest cabinet after a swearing in ceremony of the 19 executive members. nThe ceremoney was presided over by head of the Peruvian Council of Ministers, Vicente Zeballos on Thursday after Vizcarra dissolved the Congress after they denied him a vote of confidence to change the way in which the nation's Constitutional Court is appointed.

Vizcarra based his decision on the article 133 of the Constitution, which gives him the power to choose the new representatives. Ana Teresa Revilla will serve as the new head of the Ministry of Justice; Maria Antonieta Alva, Minister of Economy and Finance; Walter Roger Marcos, will assume the Ministry of Defense role, and Gustavo Meza-Cuadra will act as the nation's Foreign Minister.

In addition, Jorge Luis Montenegro will serve as Minister of Agriculture; Jorge Melendez was chosen to head the Development and Social Inclusion Ministry; Francesco Petrozzi is now the Minister of Culture; Rodolfo Yañez will be the minister of housing, construction and sanitation, while Juan Carlos Liu starts as Minister of Energy and Mines.

The high representatives of Education, Intern Affairs, Health, Labor, Production, Foreign Trade and Tourism will remain in their current positions.

Vicente Zeballos informed that these functionaries must act in accordance to the law. The president's cabinet is now made up of 11 men, including the Prime Minister, and eight women. Maria Antonieta Alva, 34-years-old, became the youngest Minister of Economy and Finance in national history.

In the middle of Peru's political crisis the only thing for certain is that Martín Vizcarra remains untouched as president with a high public approval rating.

On Monday, Peru’s President Martin Vizcarra signed an executive order dissolving the opposition-run Congress as he considered the legislature's failure to go through with his vote of confidence as a signal to dissolve the entity, which the president is allowed to do under the constitution.

However, after Vizcarra's decision was announced, Congress approved the vote of confidence, leaving the country at a critical political standstill, as they have started a process to remove Vizcarra due to "permanent moral incapacity."  Vizcarra kept on with his first-announced measure in order to keep lawmakers from appointing up to six out of seven justices in the Constitutional Court (TC).