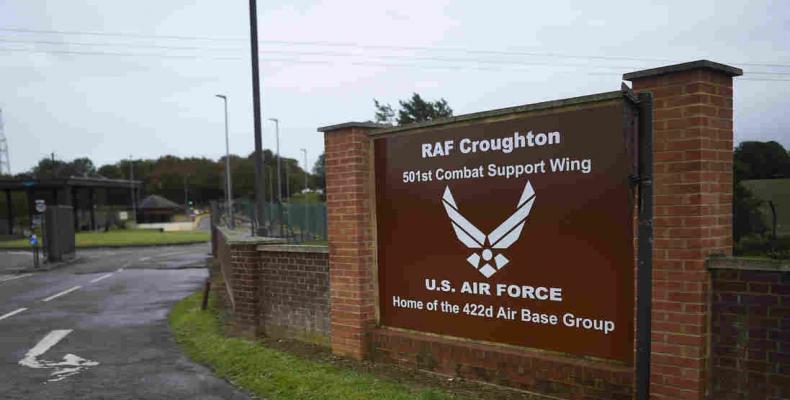 London, October 8 (RHC)-- There is mounting anger in Britain over an incident involving the wife of an U.S. diplomat.  A local young man, 19-year-old Harry Dunn, was killed when his motorbike collided with a car, driven by a U.S. diplomat’s wife, near RAF Croughton in Northamptonshire.

RAF Crouhgton has served as an American air force base on British soil since 1950.  It is currently being used as a communications station by the U.S. Air Force.

The incident occurred on August 27 and according to reports the guilty driver and her American diplomat husband quickly -- and quietly -- left the UK.  In an exclusive report, Sky News revealed that initial findings by the police indicated that Harry was riding his motorbike on the correct side of the road, but that the wife of the U.S. diplomat, who pulled out of the airbase onto the wrong side of the highway, hit him head-on.  Harry suffered multiple injuries and died later in hospital.

In a heart-wrenching interview, Harry’s mother, Charlotte Charles, told Sky News: “Everyone loved him.  We’re utterly broken inside and out, everything hurts day and night.  It’s an effort to do anything, I ache from it, every limb, every internal organ hurts.”

The incident has sparked a lively debate on the issue of diplomatic immunity and the UK’s so-called “special” relationship with the United States.  The fact that the U.S. diplomat and his wife were quietly whisked out of the country, with the wife escaping prosecution, has angered large sections of the country.

The Labour Party’s education spokesperson, Angela Rayner, spoke for many Britons when she tweeted: “This is heartbreaking and nobody can be above the law.  If you are here in the UK then you must abide by our rules.  This family deserve answers and respect shown to their son.”

People from across the UK have been venting their fury at the U.S. and UK governments on a dedicated Facebook page Justice4Harry, which was set up by retired lawyer, Radd Seigger.
Even people from America appear to be deeply upset and outraged by the incident with one American citizen, Eddie Burck, writing the following comment on the Justice4Harry page: “As an American citizen I am appalled by her fleeing the country without law enforcement’s completion of their investigation.”

The incident in late August is believed to be the 13th road accident at the U.S. airbase since 2003.  On a diplomatic level, the latest incident has put strain on the UK-U.S. relationship, not least because Britain appears unable to persuade U.S. diplomats and their dependents to comply with UK law.

In complex situations like this, where a serious crime has occurred, countries are expected to waive diplomatic immunity so that the suspect can at least be fully investigated.  Underlining Britain’s weak hand, foreign secretary, Dominic Raab, issued the following statement: “I have called the U.S. Ambassador to express the UK’s disappointment with their decision, and to urge the Embassy to reconsider it.”

At a deeper level, Harry’s death may cast a shadow over Britain’s post-Brexit diplomatic and strategic rebalancing, with the country expected to align more closely with the United States on international affairs.