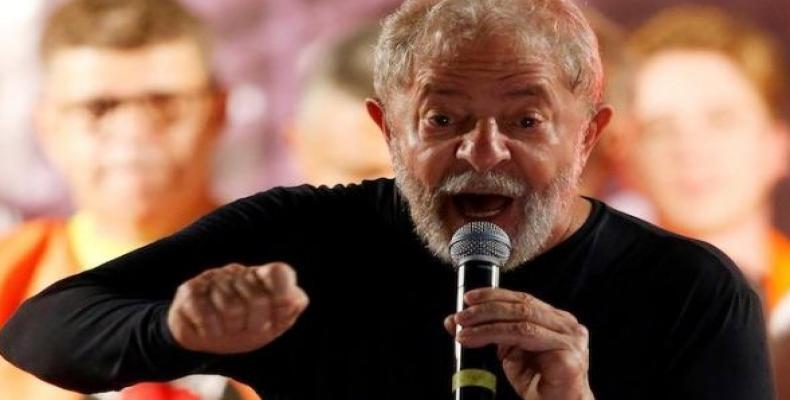 Brasilia, October 10 (RHC)-- Former President Luiz Inacio Lula da Silva, who has been imprisoned since 2018 after being convicted on corruption charges in a highly contested trial, called on the CUT, Brazil’s largest labor federation, to expand the fight against President Jair Bolsonaro’s administration.

“Today, more than ever, it’s necessary to intensify the fight to stop the destructive agenda of the extreme-right government, which threatens to cause a step backward unprecedented in historical terms,” Lula, who governed Brazil from 2003 to 2010, said in an open letter written in his cell at the Federal Police headquarters in the southern city of Curitiba.

Lula, a founder of both the CUT and the Workers Party (PT), reminded union leaders that the labor federation participated in all the movements fighting to defend democracy in Brazil in recent years.  The PT, which governed Brazil for 13 years, is leading the political opposition to Bolsonaro.

“It was in the social and political struggle that we defeated the (1964-1985) military dictatorship and it is in the democratic and transformative fight that we are going to defeat the Bolsonaro administration and the national tragedy it is causing,” Lula said.

Lula said the CUT was the organization best suited to defending national sovereignty and fighting the foreign policy of Bolsonaro, who unilaterally allied himself with the “imperialist and war-mongering policy” of the United States.

The former president said the CUT was in the best position to fight the “absurd privatization of our largest and most strategic public enterprises.”  The CUT can play a key role “in the fight against the criminal dismantling of social policies essential for the dignified existence of tens of millions of Brazilians and in the fight against the predatory exploitation of the Amazon, and the destruction of the environmental protection system we created,” the former president said.

Lula said the CUT could also play an important role in fighting other ills affecting Brazil, such as unemployment, poverty and hunger.  “And it is clear that the CUT has to keep leading the fight against the attempts by Bolsonaro to weaken and destroy labor organizations and labor legislation,” Lula said.  Last week, Lula said he would not leave the Federal Police jail for a lower-security facility amid his continuing battle with Brazil’s justice system.

The former labor leader said he did not want to engage in “exchanges” for his freedom and would only leave prison when acquitted after the prosecutors who charged Lula now say the former head of state should be granted some privileges because he has served one-sixth of his sentence behind bars and exhibited good behavior.  Lula, however, said he wanted to remain behind bars to uphold his “dignity.”

The former president is still immensely popular among Brazilians and was the front-runner in the October 2018 presidential race - and his prison sentence is likely related to the perspective of another leftist government, after his successor Dilma Rousseff was ousted in a parliamentary coup.

He is hoping for a ruling from the Supreme Court, which is reviewing the motion for a writ of habeas corpus filed by defense attorneys.  The defense team contends that Lula’s conviction, which was handed down by crusading federal Judge Sergio Moro, who is now justice minister in Bolsonaro’s Cabinet, was politically motivated.

This argument was bolstered after The Intercept, an online news outlet, published the contents of private communications among prosecutors and Moro.  Messages exchanged between Moro and prosecutor Deltan Dallagnol via the Telegram app show that the judge was deeply involved in shaping the prosecution strategy against Lula.