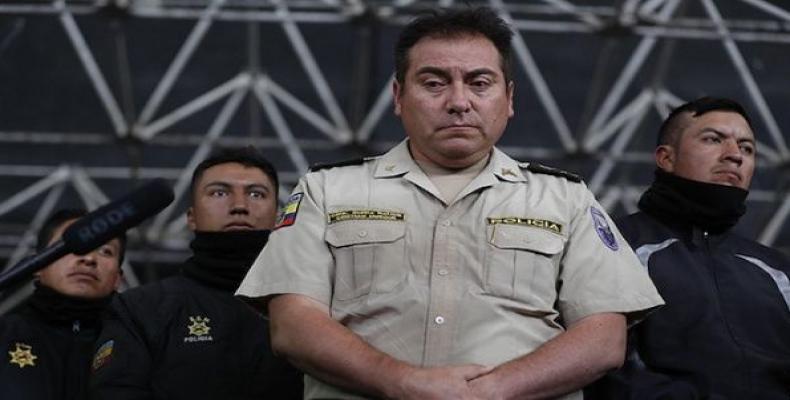 Quito, October 12 (RHC)-- The nation's main Indigenous movement, Confederation of Indigenous Nationalities of Ecuador (Conaie) released 10 police officers shortly after they had been held at Quito's Casa de la Cultura of Ecuador (CCE) on Thursday morning, following a public funeral at the same location of one of its leaders killed by a police tear gas bomb earlier this week.

Interior Minister Maria Paula Romo confirmed the news at a press conference Thursday in which she also said that journalists held inside the building were also allowed to leave, though many of the reporters said they were willing participants of the protests.

After the funeral Thursday morning, the 10 police officers were watched over by the “Indigenous Guard” in a march surrounded by hundreds of people to Alameda Park, near Quito’s historic center.
The group released the officers on Thursday evening after the funeral of leader Inocencio Tucumbi, who was killed on Wednesday during protests.

The Conaie leaders made the four officers carry the coffin because, according to the Indigenous justice system, they represented the violent repression that forced Tucumbi to become a victim of the week’s protests.

The officers were handed over to representatives of the United Nations in Ecuador.
“We thank Conaie for the peaceful handing over of the police officers. We consider this as a goodwill act that contributes to creating conditions of greater trust in order to prevent violence and seek agreed solutions to this situation,” said a message by networks spread by the UN delegation in Ecuador.

The symbolic march and the delivery of the officers were led by Conaie president Jaime Vargas and Leonidas Iza, leader of the Conaie branch of the Cotopaxi province.

The Indigenous group, outraged by the killing of one of their top leaders and by the overal police repression not only in Quito, but in several cities and rural locations across the country since nationwide anti-austerity protests began nine days ago, kept the officers in the CCE to act as shields against any police aggression during the funeral procession.​​​​​​​

Data collected by the 4th report of the @DEFENSORIAEC on #ParoNacionalEC: - 1070 people arrested since the protest began, 55% under 30, 13% teenagers. - 855 injured people treated by @IESSec, @Salud_Ec and @cruzrojaecuador. - 5 dead people.

In a statement, Conaie acknowledged that access to and exit from the CCE grounds was restricted, but assured that it was with the aim of preventing the entry of individuals who might turn violent.

Since thousands of Conaie members arrived in Quito on Monday to protest the government austerity measures linked to an International Monetary Fund (IMF) loan, the organization, historically known for its massive peaceful protests, continues to insist that it has never directed or supported any of the vandalism or violence that has occurred in the capital. Vargas and other leaders say their organized marches have been sometimes infiltrated by violent factions.

The Public Defense Office, a state office that mediates conflicts between the people and the state and acts as a human rights oversight entity, confirmed the deaths of at least five protesters as of Friday, condemning an "excessive use of force" by authorities. The office's report read that of the 1,070 captured over the past week, 76 percent had been released becaues "they had committed no crime whatsoever."​​​​​​​