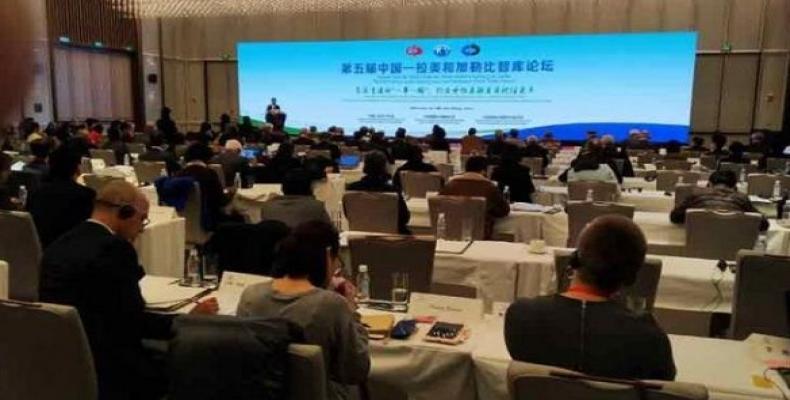 Beijing, October 30 (RHC)-- Ambassadors, government officials and experts from China and the Community of Latin American and Caribbean States (CELAC) analyzed current and future opportunities to consolidate more mutually beneficial cooperation in different fields during a meeting held in Beijing.

The representatives gathered in the fifth edition of a two-day academic forum that seeks to strengthen exchanges between the regions and promote high-quality development, connectivity and partnerships in the context of China's One Belt, One Road (OBOR) initiative.

During the inauguration, Chinese Deputy Minister of Foreign Affairs Zheng Zeguang reviewed the progress made in economic, commercial, cultural and town-to-town contact, highlighting greater international coordination and the implementation of numerous multisectoral projects.

Zheng mentioned, as an example of the close ties between China and the region's nations the authorization of six flight routes, the opening of 44 institutes and 12 Confucius classrooms to teach Mandarin and the incorporation of 19 nations to the Xi Jinping's OBOR project.

Furthermore, the Chinese official expressed the willingness of the Asian state to encourage more progress, assuring that China will always respect the development path of Latin Americans and the Caribbean, while calling to maintain support on issues of common interest in international platforms.

Among other issues, forum attendees were asked to contribute ideas that allow collaboration to be taken to new strategic domains after advocating the prompt resolution of current problems and restoration of stability in that area.

Audley denied criticism against Beijing of alleged hegemonic claims and emphasized that economic-trade relations are complementary and favor sustainable progress on each side.

The academic event brought together representatives from the host country and from Cuba, Venezuela, Trinidad and Tobago, Brazil, Mexico, Panama, Dominican Republic, Barbados, Nicaragua, El Salvador, and Haiti, among other countries.