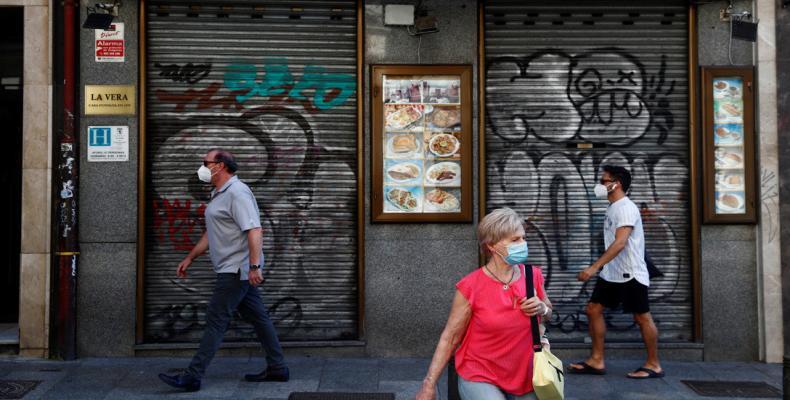 Madrid, October 22 (RHC)-- Spain has become the first Western European nation to exceed one million coronavirus cases, while the UK reported 26,688 new infections on Wednesday -- a record for the country.

With 16,973 confirmed cases in the last 24 hours, the overall number of infected in Spain has reached 1,005,295 people, according to data from the country’s health ministry.  The tally has doubled in just six weeks despite restrictions introduced by the government, including a two-week state of emergency in Madrid.

The death toll increased by 156, according to figures released on Wednesday, reaching 34,366 people in total to date. The daily fatality rate is much lower than the 900 figures registered at the peak of the outbreak in Spain in late March.

Hospital admissions increased by 20 percent over the last two weeks across Spain and by whopping 70 percent in Catalonia.  Reuters reports that the spike may force hospitals in Barcelona to suspend non-urgent procedures and focus on Covid-19 patients.

Spanish government eyes COVID-19 curfews, but needs opposition backing to extend state of alarm
The number of new infections continues to set records in some parts of Europe, where states are introducing an increasing number of restrictions.

The UK -- where 789,229 people have been infected so far -- has seen its largest daily rise in new cases on Wednesday, as 26,688 tested positive for the disease.

France is also on the way to surpassing 1 million confirmed cases this week.  The total number of infections there has reached 957,421 after 26,676 new coronavirus cases were reported on Wednesday.

Italy -- which initially bore the brunt of the viral outbreak in Europe in the spring -- also saw its national record for infections over a 24-hour period being broken in the latest reported figures, with 15,199 new cases confirmed by the health ministry on Wednesday. The previous record was set on Sunday, at 11,705.