New wave of restrictions in U.S. amid latest surge of COVID-19 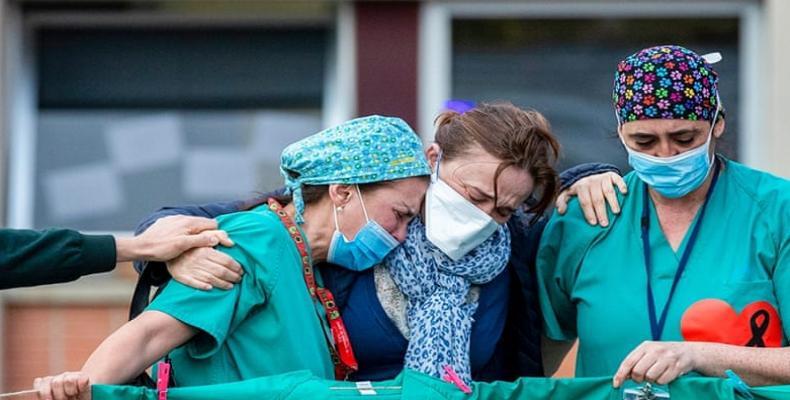 New York, November 15 (RHC)--  A new spike in COVID-19 cases and hospitalizations in the hard-hit United States has prompted a spate of new restrictions across the country, with North Dakota becoming the most recent state to require face coverings in public.

The Great Plains state, which borders Canada to its north, became the 35th state in the U.S. to impose a face-mask rule, as an uptick in hospitalizations again threatens to overwhelm the healthcare network in what is considered the third major wave of infections.

“Our situation has changed, and we must change with it,” North Dakota Governor Doug Burgum said in a statement, after the state, which has a population of just over 760,000 residents, led the country for days in new daily COVID-19 cases per capita.

The U.S. has seen a steady climb in cases since the beginning of November, and 184,514 people tested positive for the disease on Friday, the highest single-day total since the pandemic began, according to Johns Hopkins University.

As of Saturday, over 10.8 million COVID-19 cases have been recorded in the U.S. and 245,000 people have died after contracting the coronavirus – the highest in both categories of any country in the world.

North Dakota’s announcement came as the governors of Oregon and New Mexico ordered near-lockdowns in their states – the most aggressive response yet from those officials since the initial outbreak and the resulting lockdowns in the spring.

“We are in a life-or-death situation, and if we don’t act right now, we cannot preserve the lives, we can’t keep saving lives, and we will absolutely crush our current healthcare system and infrastructure,” New Mexico’s Democratic Governor Michelle Lujan Grisham said after imposing a two-week stay-at-home order.

Oregon Governor Kate Brown ordered a two-week “freeze” beginning Wednesday under which all businesses will be required to close their offices and mandate working from home “to the greatest extent possible.”  The Democratic governor warned that violators could face fines or arrest.

“For the last eight months, I have been asking Oregonians to follow to the letter and the spirit of the law, and we have not chosen to engage law enforcement,” Brown said.  “At this point in time, unfortunately, we have no other option.”

Governors in other states -- including New York, Maryland, Virginia and Minnesota -- have imposed more incremental measures over the past few days, such as limiting the size of gatherings and making businesses close early, restrict capacity or cut off alcohol sales earlier.