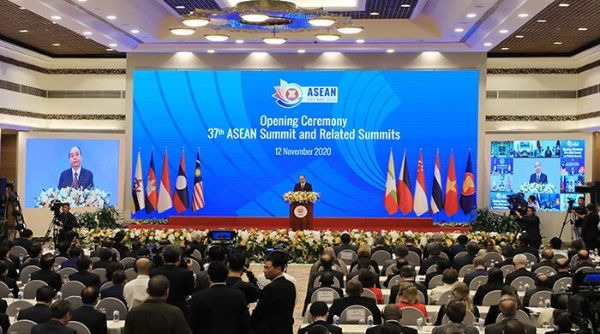 The RCEP agreement is the result of eight years of negotiations among Asean members.  (Photo: Xinhua)

The RCEP is the result of eight years of negotiations between Asean members (Brunei, Cambodia, Indonesia, Laos, Malaysia, Myanmar, the Philippines, Singapore, Thailand and Vietnam) and six nations with which the regional bloc has free trade agreements (Australia, South Korea, China, Japan, New Zealand and India, although the latter announced in November 2019 that it would not sign it for the time being).

The treaty accounts for a third of the global economy and a market of some 2.3 billion people.  The RCPE will lower tariffs to 90 percent and addresses issues such as the digital economy, investment and intellectual property, although it does not contain regulations on labor rights and the environment.

China's Prime Minister Li Kequiang, quoted by Xinhua, stressed that "the signing of RCEP is not only a historic achievement of East Asian regional cooperation, but also a victory for multilateralism and free trade," he added.

Singapore's Prime Minister Lee Hsien Loong called the RCEP "a great step forward for the world at a time when multilateralism is losing ground and global growth is slowing down.

Some experts believe that the treaty will activate the economy and accelerate recovery from the impact of the pandemic on countries in the region.