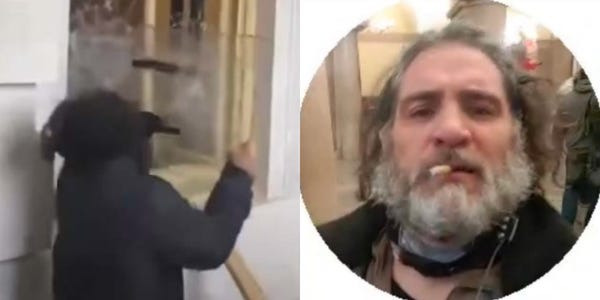 New York, January 31 (RHC)-- U.S. prosecutors have said that law enforcement officers found bomb-making instructions inside the home of former President Donald Trump’s loyalists who invaded the Capitol on January 6th.  The prosecutors said in a court filing on Friday 43-year-old Dominic Pezzola -- a member of the Proud Boys right-wing extremist group -- had saved “weapons- and bomb-making manuals” on a thumb drive device in his home near Rochester, New York, Reuters reported.

Police have so far arrested more than 135 people in connection with the demonstration by Trump’s supporters who tried to stop the formal congressional certification of Joe Biden’s victory in the disputed 2020 presidential election.  Five people were killed in the violence including a police officer. Two police officers who responded to the violent march have later on committed suicide.

The Justice Department said Pezzola and another member of the extremist group, 31-year-old William Pepe of Beacon, New York, were charged with conspiracy, civil disorder and unlawfully entering restricted buildings or grounds.  Additional charges including obstruction of an official proceeding, robbery of personal property of the United States, and assaulting, resisting or impeding officers were also brought against Pezzola, the Justice Department said.

According to the prosecution brief, Pezzola poses a “serious danger to the community and a serious risk of flight.”  So far at least two police officers have committed suicide and one succumbed to their injuries in the aftermath of the violent demonstration on the Capitol.

Another Capitol Police officer, Brian Sicknick, was hit in the head with a fire extinguisher during the violence. He died at a hospital one day after the incident.

The U.S. faces a heightened threat of domestic extremist violence for weeks from Donald Trump’s followers, the Department of Homeland Security warns, saying that the country faces a growing threat of politically-motivated domestic violence from people angry at Trump’s election loss in the controversial election.

The department issued a national terrorism advisory on Wednesday but did not specify a group that might mastermind any future attack, but made it clear that their motivation would include anger over “the presidential transition, as well as other perceived grievances fueled by false narratives.”  The advisory made a clear reference to Trump’s allegations that his election loss came as a result of widespread voter fraud.