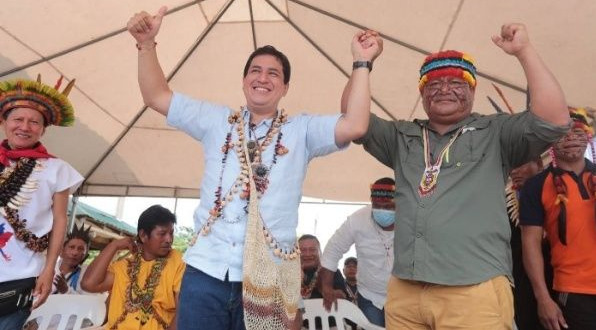 The president of the Confederation of Indigenous Nationalities of Ecuador (Conaie) stated that the nationalities of the Ecuadorian Amazon support Arauz | Photo: @ecuarauz

Quito, April 4 (RHC)-- The president of the Confederation of Indigenous Nationalities of Ecuador (CONAIE), Jaime Vargas, ratified this Saturday his support for the presidential candidate for the Union for Hope (UNES) Andrés Arauz, in view of the upcoming elections on April 11th.

Vargas, as president of Ecuador's indigenous movement, endorsed Arauz's proposal, on behalf of indigenous peoples and nationalities.   "When we talk about Plurinational State, we talk about the recognition of our peoples and nationalities that exist here in Ecuador," he said, noting that the candidate of Union for Hope (UNES) would govern for this diverse and multicultural people.

"His proposals have our absolute support from the indigenous movement of Ecuador," said Vargas effusively, who also stressed that "whatever happens, Andrés Arauz would have the support of all the nationalities of the Ecuadorian Amazon."

For his part, the UNES candidate thanked the support and on his social network account stated: "We are building national unity by putting Ecuador first.  We are summoned by the plurinational State, truth, justice and reparation."