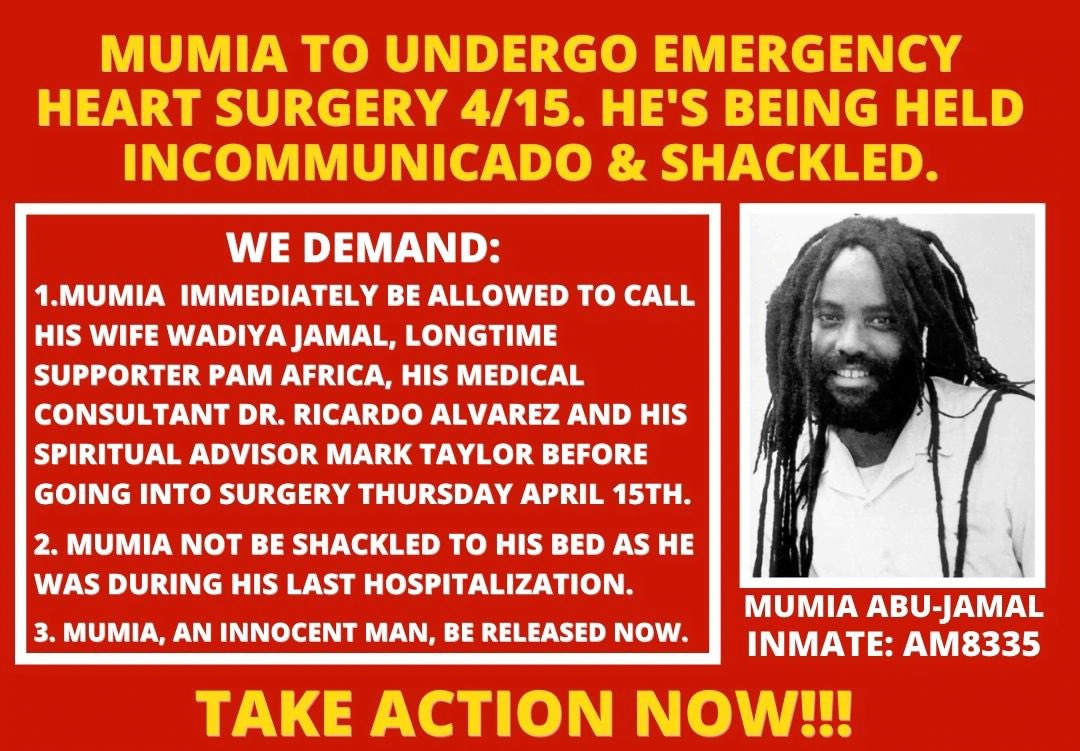 Call to action for Mumia Abu-Jamal​

Havana, April 14 (RHC)-- Radio Havana Cuba has learned that Mumia Abu-Jamal, the world renowned veteran Black Panther, political prisoner and radio journalist, had heart pain over the weekend.  He was rushed to the hospital, and is expected to undergo heart surgery tomorrow, Thursday, April 15th.

His supporters in the United States are calling for several immediate demands:

2.      Mumia not be shackled to his hospital bed, as is the rule in Pennsylvania and across the United States.

3.     Mumia’s immediate release of this innocent man from prison.

We need not look far to see the mortal danger that the shackling of a patient represents: our dear Ancestor, political prisoner Romaine 'Chip' Fitzgerald was chained and shackled to his hospital bed in his last days —while he was hardly conscious— and before making his final transition, just over 2 weeks ago on March 28, after 52 years in prison.

According to Dr. Ricardo Alvarez, Mumia’s chosen doctor: “Any evidence of shackling will be seen as a deliberate harm to Mumia and a perpetuation of the court documented trauma he has already suffered.” Loud and clear are the echoes of slavery, which —as Eric Williams shows in Capitalism and Slavery — for the first time in human history produced the global distribution and mass use of handcuffs, shackles and fetters to bring enslaved Africans to heel.

Dr. Alvarez continues: “There is significant evidence, both legal and medical, that Mumia has suffered severe harm because medical, legal, law enforcement, and judicial professionals have not met proper standards. Mumia has been recently hospitalized for COVID and Congestive Heart Failure and he already suffers from hypertension as well as liver cirrhosis and diabetes, both induced by court documented medical neglect. Freedom is the only treatment.”

Please call the following offices to make these demands: that Mumia be immediately allowed to call his wife, Pam Africa, his doctor and spiritual advisor; that he not be shackled to his hospital bed, and that he be immediately released.