Ed Snowden says: If you love truth, you're as much of a criminal as Julian Assange 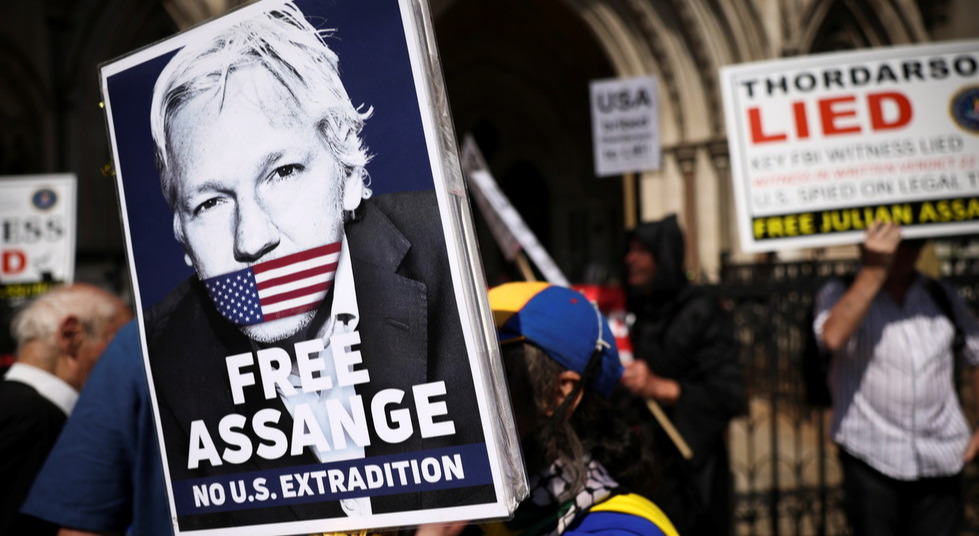 London, October 23 (RHC)-- WikiLeaks publisher Julian Assange is a political prisoner and the process against him is a crime against journalism, according to a group of academics, politicians, journalists and advocates convened ahead of his extradition hearing.

“What we’re witnessing is a murder,” NSA whistleblower Edward Snowden told the ‘Belmarsh Tribunal’ in London on Friday, appearing via video link.  “Everywhere we look, from Afghanistan to economics, from pandemic to pervasive surveillance, the obvious has been made unspeakable,” he added, because speaking up would put one in the same category as Assange, a “political criminal” charged for “the transgression of choosing the wrong side.”

“Do we have any rights, if we don’t defend them?” Snowden asked.  “Can we be said to be free if even our power to express ourselves, to understand the facts of our world, can be fenced off from us?”

Anyone who loves the truth is a criminal in the same category as Assange in the eyes of the state, and the only difference is that of degree, Snowden argued, and will share his fate.  "If we’re going to free the world, we have to free Assange."

The ‘Belmarsh Tribunal’ set out to turn the tables on Assange’s accusers -- the U.S. government, but also the UK that has kept him imprisoned, Sweden for making spurious accusations that drove him to exile in the first place, and Ecuador for revoking his asylum.

The forum was organized by the Progressive International and presided over by Srecko Horvat, the Croatian philosopher who co-founded the European political movement DiEM25 along with former Greek finance minister Yanis Varoufakis, who also spoke on Friday.

Assange is “being persecuted for being a publisher, for being a journalist,” said Machon, pointing to the “absolutely disgusting” fact that he is being denied First Amendment rights by the U.S. even as the same rights are being accorded to Christopher Steele, author of the fraudulent ‘dirty dossier’ accusing former President Donald Trump of ties to Russia.

Daniel Ellsberg, the Pentagon Papers whisleblower, made a crucial point during the tribunal: it was illegal acts and abuses during his investigation that eventually set him free.  The Assange case, he emphasized, is blatantly worse in these regards.

If Assange is extradited, every journalist in the world will have a target on his back, argued Ellsberg, who also tuned in remotely.  He was the first American to be prosecuted on the charges now levied against the WikiLeaks publisher, but was set free due to the government’s illegal acts and abuses during the investigation – which in Assange’s case ended up being “blatantly worse,” he said.

Rafael Correa, under whose presidency Ecuador gave asylum to Assange, lamented the fact that his successor Lenin Moreno offered to sell out the publisher to the U.S. within less than a week of taking office.  Moreno then allowed the embassy to “torture” Assange by depriving him of rights and putting him under surveillance, and eventually revoked his asylum in violation of Ecuador’s constitution and allowed armed British police to drag Assange out of the building, in April 2019.

"I know, as a former head of state, that states need to keep certain information confidential. But war crimes, crimes against humanity, cannot be kept confidential... and those who unveil these crimes cannot be persecuted -- even more so, persecuted by the criminals,” Correa said.

“This is just a naked political persecution,” said Stella Moris, the mother of Assange’s children, calling it emblematic of the efforts to dismantle the international rules-based order and human rights on which it was ostensibly centered.  She also brought up the recent revelations that the US government considered kidnapping Assange from the embassy or assassinating him.

“Julian is holding back a tide of authoritarianism, and if we win this, we can push back,” said Moris.  “If he loses this, we all lose.”

The US has charged Assange, an Australian citizen, with violating the Espionage Act -- a U.S. law -- by publishing classified State Department cables and Pentagon documents related to the ‘Global War on Terror’ in Afghanistan and Iraq, back in 2010, as well as conspiring with his source to hack into computers.  That’s despite the key witness in the case admitting that he lied about some of the decisive facts on which the prosecution’s argument has been built.

Assange has been held without bail at the maximum security Belmarsh prison in south London for almost 2.5 years now.  His extradition has already been refused, but the U.S. has appealed that decision, and the appeal is to be heard next week.