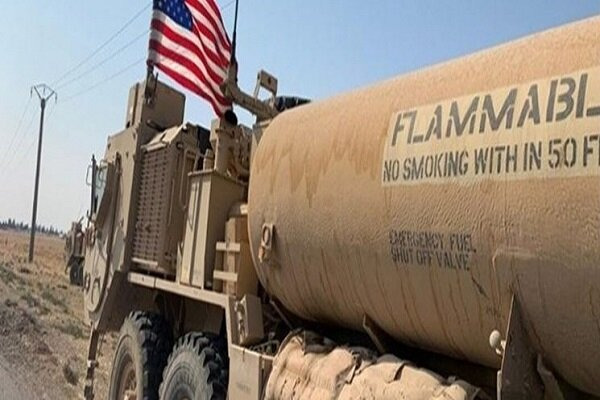 U.S. occupation forces have set up an oil refinery in the northeastern Syrian city of Hasakah, as U.S. military trucks continue to smuggle crude oil from the energy-rich region to Iraqi territory.

Damascus, January 10 (RHC)-- U.S. occupation forces have set up an oil refinery in the northeastern Syrian city of Hasakah, as U.S. military trucks continue to smuggle crude oil from the energy-rich region to Iraqi territory.

A source at Directorate of Rmelan fields told SANA that the oil refinery has a capacity to refine 3,000 barrels per day, adding that there will be a large increase in stealing and looting the Syrian oil from the area by American troops and the SDF militants following the installation of the oil refinery.

Meanwhile, local sources have said a U.S. military convoy of 79 vehicles, including tankers carrying stolen Syrian oil, headed to northern Iraq through the illegal al-Waleed border crossing on Saturday evening.   The sources added that four armored vehicles belonging to the US military escorted the convoy,

However, several villages in Hasakah have in coordination with government forces prevented a number of US military convoys from passing through their communities and have forced them to turn around and head back in the direction they came from.

The U.S. military has stationed forces and equipment in eastern and northeastern Syria, with the Pentagon claiming that the deployment is aimed at preventing the oilfields in the area from falling into the hands of the Daesh terrorists.  Damascus, however, says the unlawful deployment is meant to plunder the country’s resources.

Former U.S. President Donald Trump admitted on several occasions that American forces were in Syria for its oil.  After failing to oust the Syrian government with the help of its proxies and direct involvement in the conflict, the U.S. government has now stepped up its economic war on the Arab country.