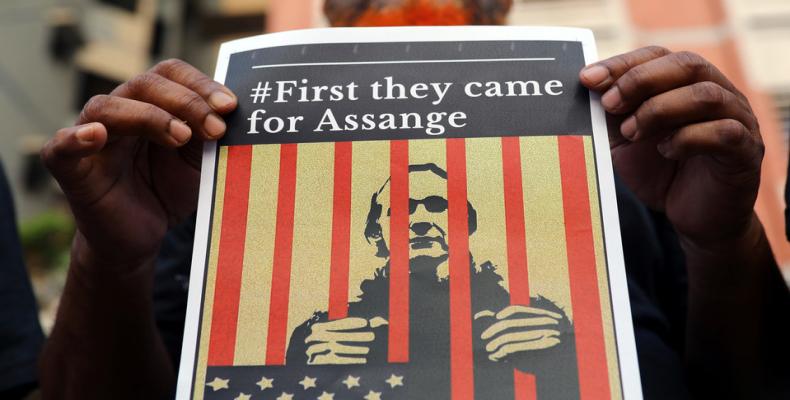 Mexico City, May 27 (RHC)-- Mexican President Andres Manuel Lopez Obrador reiterated his offer of asylum to WikiLeaks founder Julian Assange, whom he considers "politically persecuted" in the extradition process to the United States that the activist faces in the United Kingdom.

"There have been communications with the Ministry of Foreign Affairs [of Mexico] and we offer asylum.  We are in favor of his release because he is a politically persecuted person," the head of state said at a press conference.

Assange's defense submitted last week to UK Home Secretary Priti Patel a request to prevent his extradition to the United States, ordered on April 20th by the Westminster Magistrates Court in London.

"It is a shameful act that they [judge] a person who discloses valuable information, because in that information there are acts of corruption and crimes committed between governments are disclosed," the Mexican ruler responded to a question about the case at the press conference.

Mexico offered asylum for Assange since January last year, when the U.S. asked the United Kingdom to extradite the cyberactivist to try him for 17 alleged crimes in violation of the Espionage Act of 1917, and one of computer intrusion.

López Obrador highlighted the importance of the revelations made by Julian Assange through Wikileaks investigations on communications between governments, such as the United States.  The Mexican president said that above the means of this investigation is "the essence of the very serious denunciation of interference in government affairs.

The charges against Assange are punishable by up to 175 years in prison and are related to the access and publication of military parts of Iraq and Afghanistan, the illegal U.S. base in Guantanamo and diplomatic reports that reveal alleged war crimes and other abuses by U.S. officials and authorities.

The Mexican president regretted that there is an attempt to condemn the founder of Wikileaks for disclosing this confidential information.

"They should give him his freedom and we -- if he wishes... his family, lawyers and friends -- could have asylum in our country.  That is our firm position."