Dickon Mitchell is sworn in as Prime Minister of Grenada 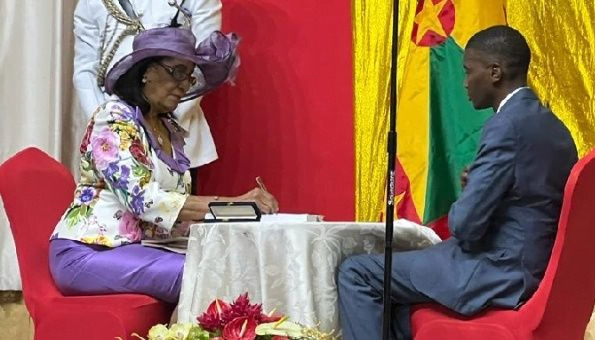 St. George's, June 25 (RHC)-- Dickon Mitchell has been sworn in as Prime Minister of Grenada after defeating Keith Mitchell in the parliamentary elections.

The 44-year-old notary is a member of the National Democratic Congress (NDC), a Leftist party that achieved 9 out of 15 parliamentary seats.  He obtained 52 percent of the votes, meanwhile Keith Mitchell, who was running for his sixth re-election, got 47 percent of the ballots.

A few hours after the election results were announced, leaders from other Caribbean nations began to send their messages of congratulations to the NDC leader.

"On behalf of the Government and people of Barbados, I wish to extend congratulations to Prime Minister-Elect of Grenada, Dickon Mitchell on his victory," Barbados Prime Minister Mia Mottley tweeted.

"Congratulations to Dickon Mitchell on his election as Prime Minister of Grenada.  I ratify our will to continue advancing in the development of friendly relations and cooperation between Grenada and Cuba, for the benefit of both peoples," Cuban President Miguel Diaz-Canel said.

“Congratulations to Prime Minister-elect Dickon Mitchell and the NDC on their remarkable victory in Grenada, on behalf of the ULP and the Government and people of Saint Vincent & the Grenadines.  I look forward to working with the new government in advancing the regional agenda,” Prime Minister Ralph Gonsalves said.

"The Government and people of Belize congratulate Grenada's new Prime Minister, Dickon Mitchell on his victory in elections.  Belize looks forward to working with you to continue deepening the excellent relations between our two countries and to transform our region," the Ministry of Foreign Affairs of Belize stated.

Grenada, with an area of 344 square kilometers and with the tourism sector and the production of spices as pillars of its economy, is a member of the Caribbean Community (CARICOM) and the Organization of American States (OAS).  This former British colony in the Caribbean Sea is located north of Trinidad & Tobago and Venezuela and south of Saint Vincent & the Grenadines.