Benin bronzes go on last exhibition in Berlin before repatriation 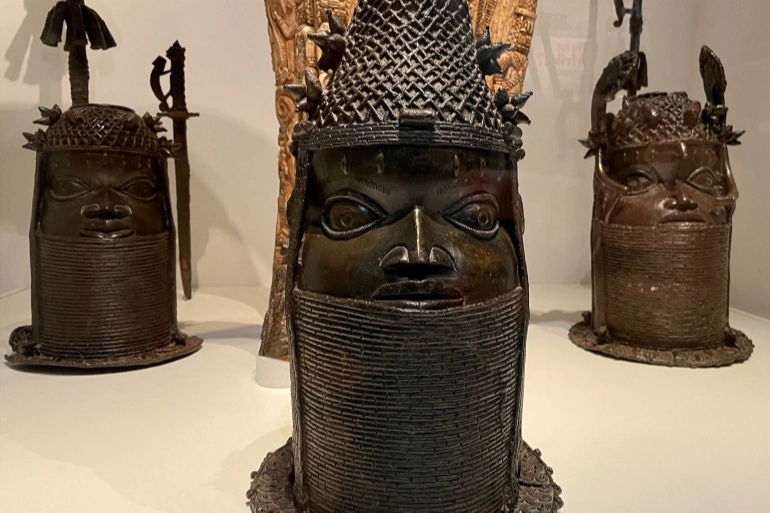 Benin art objects and bronzes are pictured at the Linden Museum in Stuttgart, Germany on June 29, 2022 [Louisa Off/Reuters]

Berlin, September 16 (RHC)-- Stolen during the colonial era, dozens of bronzes that once decorated the royal palace of the Kingdom of Benin in southern Nigeria will go on show for one last time in Berlin from Saturday before repatriation to their original home.

Thousands of Benin bronzes, as they are known, are scattered around European museums alongside metal plaques and sculptures from the area after being looted by the British at the end of the 19th century.

The move to return some of the renowned pieces of African art is the latest in a series of attempts by Germany to try to take responsibility for its crimes in the colonial era.  In May 2021, it officially recognised the genocide it perpetrated in Namibia between 1904-1908, promising more than one billion euros ($1.2 billion) in financial support for infrastructure projects there.

Among the items being exhibited at the Humboldt Museum in Berlin, beginning this weekend are a pair of thrones and a commemorative bust of the monarch. They used to decorate the walls of the royal palace in Benin City, in southern Nigeria.

Two rooms in the sprawling museum are being dedicated to the art and the history of the Kingdom of Benin, an exhibition realised “in close cooperation with partners in Nigeria”, according to the German side.  The removal of precious objects is explained in the gallery, while educational workshops are also planned around the display.

The recognition of the colonial injustices and the subsequent return of the items “will continue to define our work in the future,” Hermann Parzinger, the president of the Prussian Cultural Heritage Foundation, which oversees the national museums in the German capital, said in a statement.

“Just like the Netherlands and Belgium, Germany has established a museums policy that has a lucid view of the colonial past,” French historian Pascal Blanchard, a specialist on the era, told the AFP news agency.

The Africa museum in Tervuren, near Brussels in Belgium, which reopened at the end of 2018, claims to take a “critical look” at the past and the history of the objects collected by Belgian King Leopold II, who for a long time kept the Congo as his private property in the 19th century.

Unlike some countries, such as France, Germany lost its empire after its defeat in World War I and as such does not have a significant community of people repatriated from Africa.  “It does not play politically, which makes it easier to come to terms with the past,” said Blanchard.

Nonetheless, Germany has been criticised in recent years over the origin of many of the objects in its museums, following in the wake of a greater public reckoning with racism.  The outrage grew louder with the opening of the first part of the new Humboldt Museum in December 2020, which is housed in a partially rebuilt Prussian palace.

The highly symbolic location – the former residence of the Hohenzollern dynasty, who oversaw Germany’s colonial adventures – was set to exhibit objects from the period.  Berlin’s Ethnological Museum currently holds 530 items that were taken from the Kingdom of Benin, including some 440 bronzes, considered to be the largest collection behind the British Museum in London.

According to the Berlin museum’s Director Lars-Christian Koch a portion of the objects will soon be returned, another third will be kept as a loan, and the rest, not on display, will be studied by researchers.

Germany is not the only country to begin returning stolen artefacts. In November 2021, France returned 26 artefacts from the royal treasures of Abomey to the country of Benin, next to Nigeria.  The pressure is also growing on the British Museum, which has approximately 700 bronzes. It has long been argued that its vast trove of foreign artefacts, such as the Elgin Marbles taken from the Parthenon in Athens, are best housed there.

The repatriation of the objects was a long time coming in the opinion of historian Benedicte Savoy. “The requests for return go back to independence in the 1960s,” she told AFP. “They have been silenced, refused, forgotten for years.”

Nigeria is planning to build a museum in Benin City, to bring together the works on their return.