Spanish Nurse with Ebola At Serious Risk of Dying 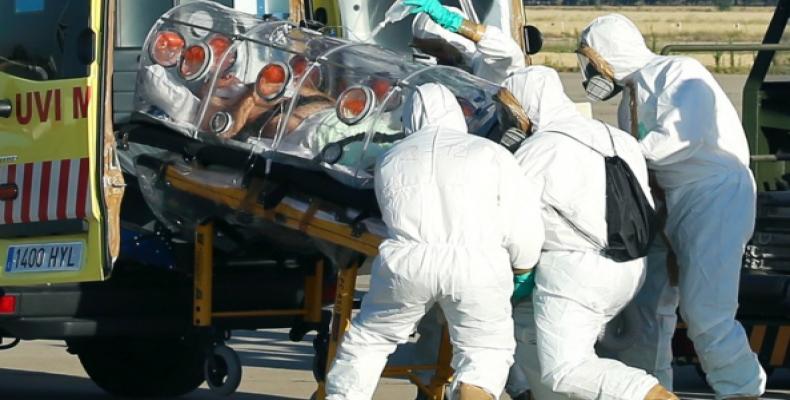 Madrid, October 10 (RHC)-- Officials say the 44-year-old Spanish nurse infected with Ebola is at "serious risk" of dying from the disease after her condition got worse. Teresa Romero is "very ill and her life is at serious risk as a consequence of the virus," the Madrid regional president, Ignacio Gonzalez, told parliament on Thursday.

“Her clinical situation has deteriorated but I can't provide more information," an unnamed spokeswoman for the La Paz-Carlos III hospital, where Romero is being treated, told reporters. Romero was admitted to the hospital earlier this week with a high fever and was placed in isolation. Further hospital tests proved that the nurse was in fact infected with Ebola.

The woman reportedly helped treat two elderly Spanish missionaries, who died after returning from West Africa with Ebola in August and September.

Spain’s health system has come under fire over safety failures following the news. The European Union is demanding explanations from Madrid on how the disease could spread inside a specialized disease unit.

According to the World Health Organization, a total of 8,033 people have been infected with Ebola across five West African countries and the United States. Of those, about 3,870 have died.

Ebola has infected 1,298 people in Guinea, killing 768 of them. A total of 3,924 people have contracted the deadly disease in Liberia, the hardest-hit country to date, and 2,210 of them had died.

In Sierra Leone, Ebola had infected 2,789 people and killed 879 of them. Nigeria has recorded 20 cases, including eight deaths. Senegal's sole confirmed Ebola case has recovered, but the country will not be declared free of the virus until 42 days after the case was recorded. The United States has seen one confirmed case, Thomas Eric Duncan, 42 years old, who caught the virus in Liberia and died in a Dallas hospital on Wednesday.