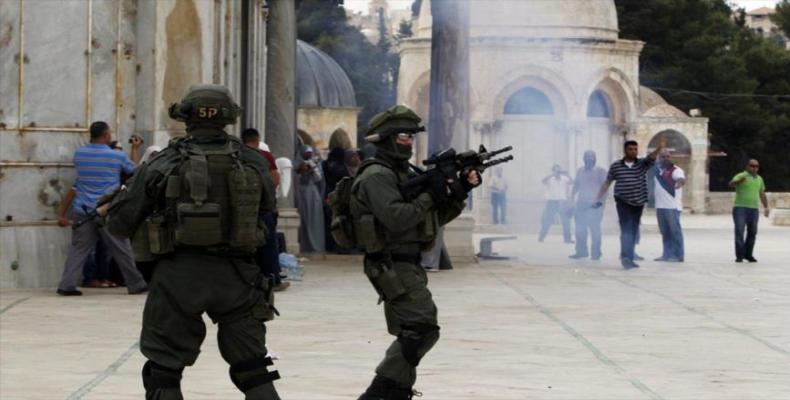 Jerusalem, September 19 (RHC)-- Scores of people have staged massive demonstrations across the occupied Palestinian territories to express their outrage over the Israeli military’s assaults on the al-Aqsa Mosque compound in the occupied Jerusalem over the past few days.

On Friday, clashes broke out between Palestinian worshipers and Israeli troopers after the latter banned those under the age of 40 from accessing the sacred site. Israeli forces reportedly fired tear gas canisters to disperse the crowd.

Israeli forces had earlier beefed up their presence in Jerusalem, deploying over 5,000 troopers to confront the worshipers. They had also closed roads in the Old City of Jerusalem.

The heavy deployment came after Gaza-based Palestinian resistance movement Hamas dubbed Friday a “Day of Rage” against Israel over its desecration of the al-Aqsa Mosque. During the Friday clashes, several people sustained injuries when Israeli forces fired rubber-coated steel bullets and hurled tear gas canisters at a group of Palestinian protesters in the southern West Bank city of Hebron, located 30 kilometers (19 miles) south of Jerusalem.