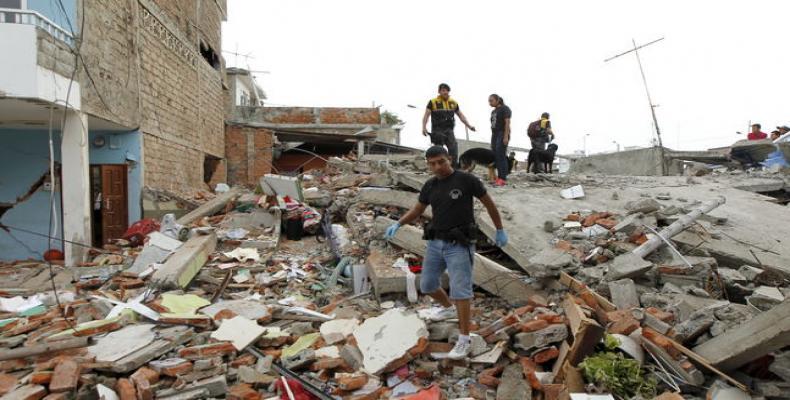 A series of strong aftershocks have followed Saturday's initial earthquake, which was the strongest to hit the South American nation in 40 years.  The Ecuadorean government has said at least 525 people have been killed by Saturday's 7.8-magnitude earthquake, and over 4,600 were injured.

The United States Geological Service says Wednesday’s quake was located 214 kilometers North West of Quito, where it was felt, as was in the coastal areas of Guayaquil and Manta.

President Rafael Correa, supervising work in the disaster zone, said the quake had inflicted around $3 billion of damage and could knock two to three percentage points off the country's annual growth, meaning the economy could shrink this year.

Meanwhile, survivors in isolated communities struggled without water, power or transport, although international aid was beginning to arrive.  Along Ecuador's Pacific coast, sports stadiums served as both morgues and aid distribution centers.

Rescuers were reportedly losing hope of finding anyone alive, even as relatives of the missing begged them to keep looking.

Official sources have warned that the death toll may keep rising, and that figures could exceed those from the earthquakes of last decade in Chile and Peru.