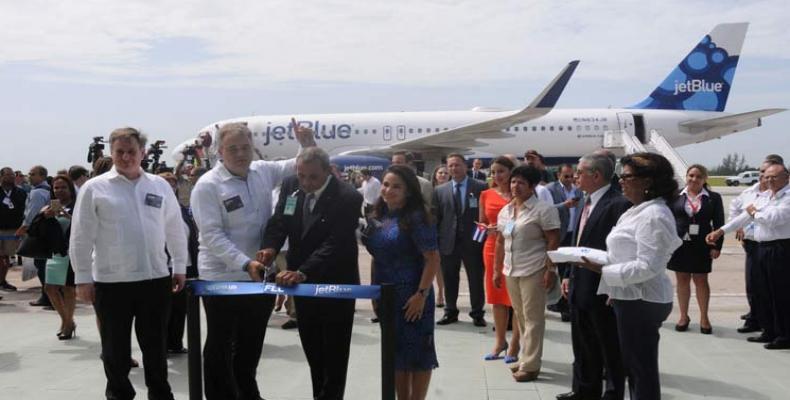 A timid sunshine, following days of stormy weather, welcomed the JetBlue Airbus A320 aircraft that inaugurated the scheduled U.S. flights.

Earlier this week, Secretary Foxx wrote on his Twitter account:
"Today, I'm excited to announce that I'll be on the first scheduled commercial flight in more than half a century.

Cuba and the United States began a process toward normalizing bilateral relations in December 2014. Ever since, several rounds of talks have taken place indistinctly in Havana and Washington, with official delegations from both countries discussing a wide range of topics, including thorny issues as well as cooperation in several areas of mutual interest.

JetBlue Airways is the first of several U.S. carriers that have been authorized to begin serving Cuba in the coming months. However, travel restrictions under Washington's nearly 60 decade-old blockade policy towards Cuba still remain, prohibiting U.S. citizens from visiting Cuba as tourists.

The airline's Fort Lauderdale-to-Santa Clara route will initially run three times a week, until October 1st, when the flights are expected to become daily.

JetBlue will operate with 150-seat Airbus A320 aircraft, and in addition to Santa Clara, it plans to offer daily nonstop service also to the Cuban cities of Camaguey and Holguin, starting November.