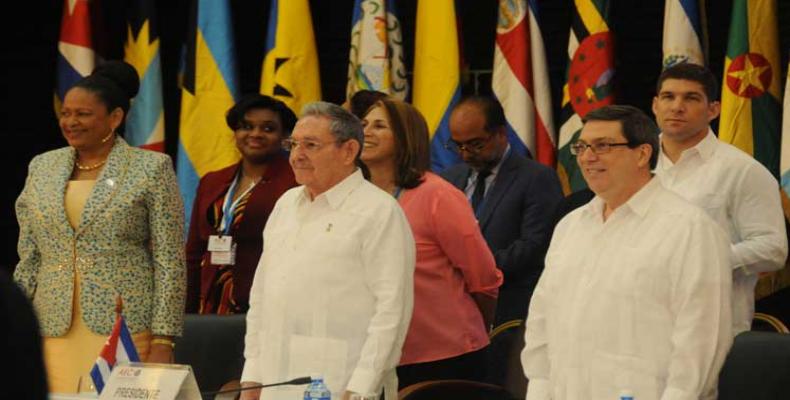 Havana, March 10 (RHC)-- Cuban President Raúl Castro presided over the 22nd meeting of the Council of Ministers of the Association of Caribbean States or ACS on Friday at the Habana Libre Hotel.

Echoing President Raúl Castro's remarks at the recent CELAC Summit in the Dominican Republic, Minister Rodríguez said: 'more than ever before, regional nations should forge the path of unity, based on our peoples' common history and interests.'

“Important changes have taken place in the world that significantly affect our region,” said the top Cuban diplomat. The meeting takes place in the framework of the process of revitalizing of the Association of Caribbean States –a regional consultation and cooperation mechanism created in Cartagena de Indias, Colombia in 1994.

Minister Rodríguez affirmed that the discriminatory migration policies announced by wealthy destination countries invariably lead to the mass deportation of Latin American and Caribbean peoples. This, he said, coupled with the implementation of extremely protectionist trade measures, represent huge challenges for our subregion.

The Cuban foreign minister said that our governments have the duty and the responsibility 'to strive toward building people-centered, just, equitable and inclusive societies.' To achieve this, we must advance toward integration of all Latin American and Caribbean nations and peoples, as dreamed about by regional independence heroes.

June Soomer, Secretary General of the Association of Caribbean States or ACS also addressed the inaugural session. She pledged women's commitment to regional integration and thanked ACS members for her re-election.

“I will continue to work toward advancing and defending our common Caribbean heritage”, said the diplomat from Saint Lucia, and added: “Our region has great potential and possibilities.”