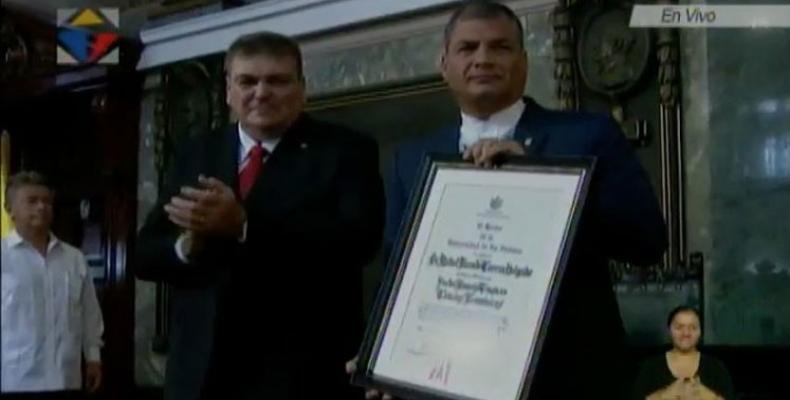 Havana, May 5 (RHC)-- The University of Havana granted Ecuadorian President Rafael Correa an honorary doctorate of Economics in recognition of his academic and political career.

University of Havana Rector Gustavo Cobreiro spoke highly of what he described as the Ecuadorian president's Latin Americanist and integrationist vocation.  Cobreiro also noted that President Correa and Cuban revolutionary leader Fidel Castro had had a long-standing friendship.

Correa thanked the University of Havana for the degree.  He said cooperation between Cuban and Ecuadorian universities should be expanded, in pursuit of educational excellence.

In statements to Radio Havana Cuba, the Ecuadorian head of state referred to the situation in Venezuela.  He said: “What we are witnessing is the ruthless attack by right-wing forces, which have resorted to all sorts of aggression, economic war, media war, and street violence. We hope that the current situation can be resolved peacefully, democratically, but we need to be clear about what is going on in Venezuela. For some years now, Venezuela has been the victim of ruthless, brutal attacks by de-facto, right-wing local and foreign forces.”

The visiting Ecuadorian president will be meeting President Raúl Castro later on Friday.