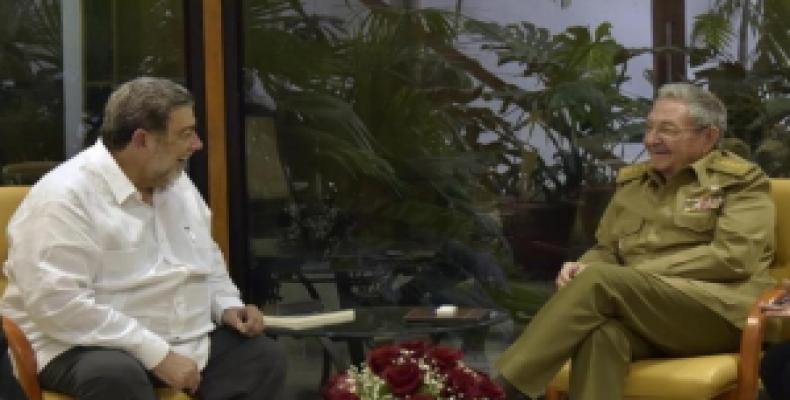 Havana, June 20 (RHC)-- President Raúl Castro has received the Honorable Dr. Ralph Gonsalves, Prime Minister of St. Vincent and the Grenadines, who is paying an official working visit to Cuba.

During the fraternal meeting, the two leaders discussed the excellent state of bilateral relations. They agreed that 2017 is a special year for both Cuba and St. Vincent and the Grenadines, marking the 25th anniversary of bilateral diplomatic relations.

During his meeting with the Cuban head of state, Ralph Gonsalves pledged the solidarity of his government and people with the Cuban people in light of President Trump's new aggression against Cuba.

About the new Cuba policy announced last Friday in Miami by the U.S. president, the prime minister of St. Vincent and the Grenadines said: “For over 50 years, the U.S. policy against Cuba has failed and it will fail again.”

In statements to the press prior to his meeting with Raúl, Gonsalves confirmed that when the Cuban resolution against the U.S. blockade is presented again this year at the UN General Assembly, the vast majority of the international community will again voice their strong opposition to Washington's coercive anti-Cuba policy.

The Caribbean leader added that Trump's anti-Cuba rhetoric runs contrary to world public opinion, and represents a setback in the bilateral diplomatic and political achievements over the past two years.