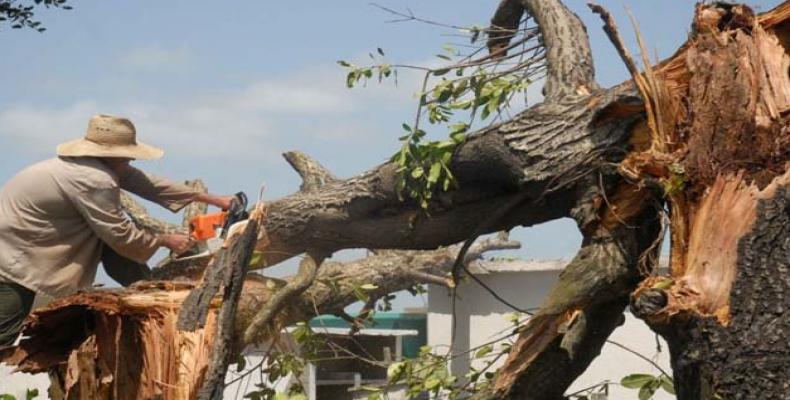 In remarks to the press, he noted how the Island has developed great skills in preventing the loss of human lives and in reducing economic damages, and he attributed that accomplishment to the Revolution´s efforts to articulate ideology with the social and economic spheres.

He also said that in this year´s exercise special attention was paid to issues that delayed recovery efforts after Hurricane Irma hit the island last September, among them, the availability of water pumps and power generators.  He also stressed that special attention is being paid to the planting of tree species that are likely to cause less damage to roads, sidewalks and infrastructures in the event of a natural disaster.

As part of the closing day of the drill on Sunday, sanitation, boat protection and river cleaning actions were undertaken in Havana.

In addition, workers from the Ñico López refinery staged a simulation to evaluate responses to possible spills of liquid chlorine.

The Meteoro drill is held in Cuba every year in all  provinces before the start of the hurricane season, which runs from June 1 to November 30. It is directed and coordinated by the island´s Civil Defense System. Its goal is to increase the population's readiness to face tropical cyclones and other natural, technological and health emergencies.

The Cuban Civil Defense system was launched in 1962.  The following year, in 1963, Hurricane Flora, one of the deadliest in recorded history, left one thousand 126 deaths in Eastern Cuba.

The tragedy corroborated the importance of the Civil Defense System, and ever since it has garnered international recognition for the op-notch  protection it provides to the Cuban population.