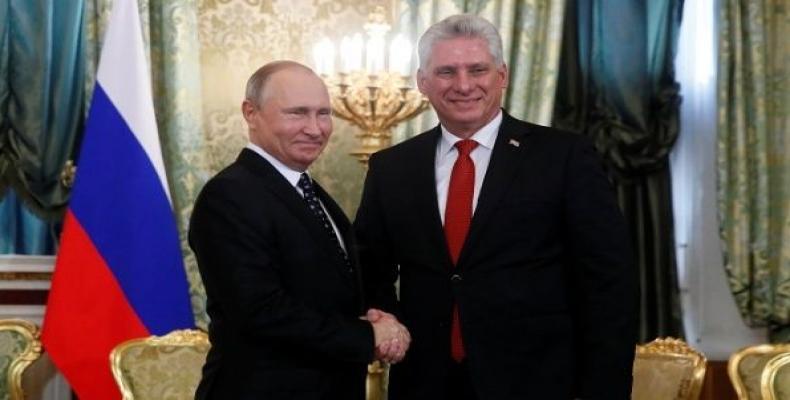 "We have made important progress in several strategic areas for the development of our country," Diaz-Canel told the international press after the meeting in the Kremlin.  He also stressed Cuba-Russia "relations are of a high level, especially in the political sphere."

Cuban-Russian diplomatic relations, which date back over many decades, have strengthened as both countries are currently facing sanctions from the United States.  This new wave of economic and political aggression against Cuba prompted Diaz-Canel to bolster relations with countries such as France, China, Vietnam, North Korea and Laos.

Diaz-Canel's official visit to Russia comes after the two nations signed a series of bilateral agreements valued at over $250 million in Havana, Prensa Latina reported.   The visit was also preceded by a resounding diplomatic victory scored by Cuba as the United Nation General Assembly overwhelmingly rejected the U.S. blockade against the island on Thursday.

During his first official visit to Russia, Diaz-Canel also met with representatives of the State Duma (the lower chamber of Russia's Federal Assembly) and of the Federation Council (upper house).  The two chambers of the legislature recently approved resolutions calling on the United Nations and the international community to condemn the U.S. blockade of Cuba.

Following the meeting with Russia's legislature, the president of the State Duma, Viacheslav Volodin stressed: "It is not only about Cuba and Russia but also China, Iran, Turkey, and many other countries disfavored by the U.S. that face sanctions."  Volodin also warned that only the U.N. Security Council has the power of placing sanctions against sovereign nations.

After the meeting with Putin, the two heads of state signed a joint statement condemning the use of unilateral measures, like economic sanctions, as a foreign policy tool.  "Russia and Cuba have always advocated in favor of strict observance of the key principles of international law enshrined in the U.N. Charter, including respect for sovereignty and the interests of all states, the inadmissibility of coercive pressure, the use of unilateral sanctions and interference in internal affairs," Putin said.

The Cuban president will be in Russia until Saturday, November 3rd.  Putin is expected to visit the Caribbean country in 2019, after being officially welcomed by Diaz-Canel.